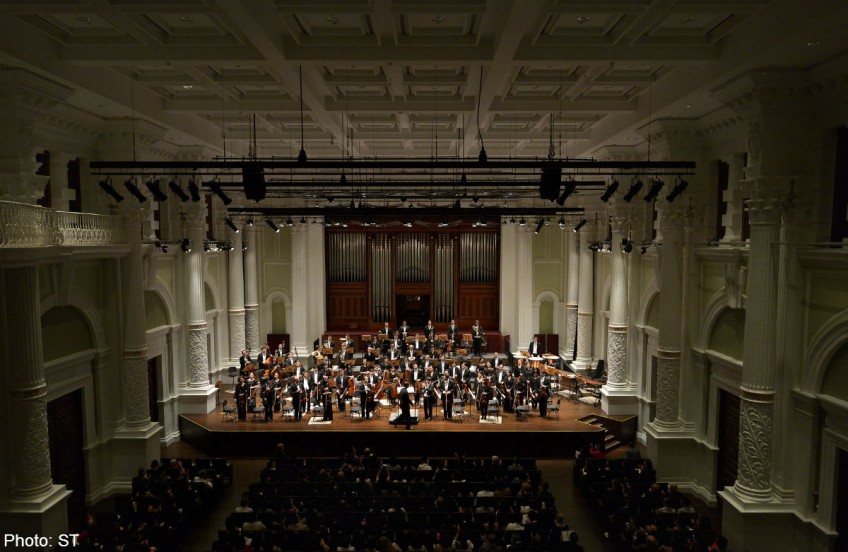 The SSO playing for the 600 invited guests last night at the first performance held in the revamped Victoria Theatre and Concert Hall.

Dressed in sharp suits, even smarter dresses and traditional outfits including sarong kebayas and saris, the guests mingled in the central atrium, created from a restored 1905 passageway linking the theatre and concert hall, before the performance.

"Oohs" and "ahs" were heard as guests took in the soaring glass ceiling, which gave a clear view of the iconic clock tower sited outside the building.

Prime Minister Lee Hsien Loong and Minister for Culture, Community and Youth Lawrence Wong were among the guests at the SSO's homecoming concert.

The concert hall, once known as Victoria Memorial Hall, opened in 1905 and has been the orchestra's home since 1979.

The concert hall and the theatre were closed for more than four years for the $158 million refurbishment by W Architects.

Mr Wong lauded the architects for the "beautiful restoration". He said he had been tracking the work and that it was good to see the building finally re-open.

Once inside the hall, the guests admired the warm lighting, the comfortable chairs, the plush carpeting and the increased leg room. To accommodate more legroom, the seating capacity in the concert hall was reduced from 883 to 673.

Several prominent members of the arts community praised the architectural improvements and the special care taken to retain several original elements of the iconic building.

Indian dance pioneer and educator Neila Sathyalingam, who is in her 70s, called the refurbishment "fantastic", and praised the improved acoustics of the concert hall and theatre.

She had also visited the theatre and said the "sound there is much improved. It will enhance the theatre-going experience".

Prominent arts philanthropist Priscylla Shaw said she was pleased that the architects had treated the building "so sympathetically" and had taken care to retain elements of the building's rich past while modernising it.

The re-opening of the venues promises to meet the demand for mid-sized performing spaces in the city.

This weekend, members of the public can take guided tours of the renovated spaces and catch performances by arts groups.