'The greatest Chinese outside mainland China' 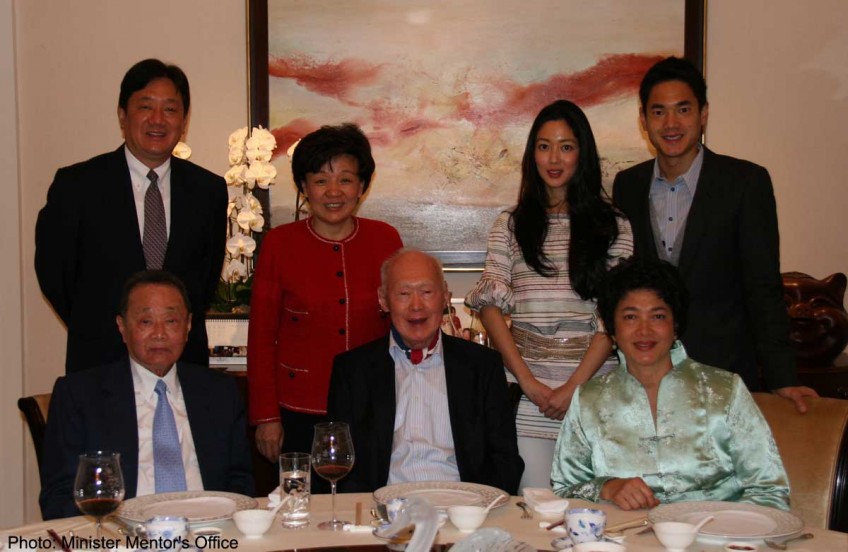 On his regular visits to Hong Kong, Mr Lee Kuan Yew observed that when people there failed in business, they blamed themselves or bad luck, picked themselves up and tried again.

He wondered how to encourage that entrepreneurial spirit among Singaporeans, and would put the question to powerful businessmen he met there.

South-east Asia's richest man, Mr Robert Kuok, remembers how he responded to Mr Lee: "I told him, you have governed Singapore too strictly, you have put a straitjacket on Singapore. Now, you need to take a pair of scissors and cut it."

The Malaysian tycoon would sometimes invite other Hong Kong businessmen to meet Mr Lee, who was always ready to talk politics.

But on his last trip, in May 2012, Mr Lee was more subdued. His wife had died, and he visited another old friend, media mogul Run Run Shaw, who was ill. Mr Lee sat quietly by Sir Run

Run's wheelchair, saying little but patting the centenarian's knee from time to time.

"He had grown far more mellow," recalled Mr Kuok in an interview at his Deep Water Bay home in March 2013. It was a different side of a man he had known for seven decades.

Did that make them stubborn? No, he said. "Greedy. See food, eat. See power, grab." From Hong Kong, Mr Kuok presides over an US$11.4 billion (S$15.4 billion) family business empire that spans the Shangri-La hotel chain to logistics to being the world's biggest processor of palm oil.

He said they were not especially close in school. Harry, as the young Mr Lee was known then, already had a reputation for pugnacity. "He was combative, wanting to win every argument.

Not someone you would take an immediate great warmth and liking to," said Mr Kuok. And because Harry was "intellectually a cut above the average", there was "a slight feeling of superiority" about him. He did not mix much, though he did attend the college's annual fancy dress ball in 1941 in Malay garb complete with a songkok. Mr Kuok went as a Mandarin.

On Dec 8 that year, their lives were disrupted when the first Japanese bomb landed, bringing World War II to Singapore.

Mr Kuok returned to Johor Baru, where his parents ran a shop selling rice, sugar and flour. By the time he returned to Singapore in 1955, he had established a sugar refining business that would be the foundation of his fortune and earned him the title of Malaysia's Sugar King.

Mr Lee was a lawyer and rising politician, and a founder of the People's Action Party.

They would meet occasionally and Mr Kuok found Mr Lee "still pretty curt", but now he was obsessed with Singapore. In 1970, Mr Kuok received a call from the Istana inviting him to

the Prime Minister's Office. Mr Lee wanted his views on Malaysia, saying his analyses were more down-to-earth than the official briefings he received. These meetings occurred regularly till 1973 when Mr Kuok moved to Hong Kong. After that, they met mostly when Mr Lee visited Hong Kong.

"Over the years, he shed a lot of his stiffness," he said, though they did not agree on everything.

"Politically, I did not share all his views," revealed Mr Kuok, citing as an example the benchmarking of ministerial pay to the private sector.

Yet it was Mr Lee's single-mindedness that made Singapore thrive, Mr Kuok acknowledged, and it helped that he possessed "all these strong leadership traits - an intimidating attitude, presence of face and body".

"He was very sure of himself, resolute, even ruthless. But he turned Singapore into a model nation, put in place a government that cared for its people, and made sure that others would not bully Singapore," he said. "The greatest Chinese outside the mainland is Lee Kuan Yew."