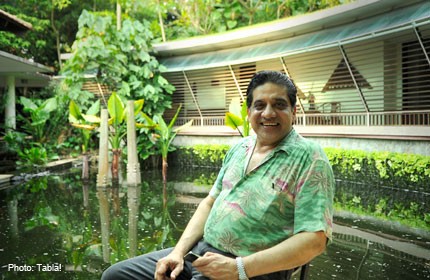 Dr Easaw Thomas, an anaesthetist, at his home in Bukit Timah.

EASAW Thomas, Bhavani Prakash and Kirtida Mekani have an evergreen passion which rightly deserves to hog the headlines as the National Parks Board (NParks) commemorates 50 years of Singapore's greening in a golden jubilee tree-planting session and commemorative dinner next week.

The trio have earned ecological nicknames for their long-term association with nature and plant-beauty. Dr Thomas, who has planted more than 100 indigenous forest trees in his 26,000 sq ft bungalow along Wilby Road, off Upper Bukit Timah, has been hailed the "Green Doctor". Ms Prakash, a financial expert turned environmental activist who runs a popular website Eco Walk The Talk, has been praised as the "Green Lady" while Mrs Mekani and her businessman-husband Bharat are fondly known as the "Green Couple" because of their passionate grassroots roles in greening Singapore.

"Green" Indians, you may call them but, in a nutshell, these role-model Indian Singaporean migrants sum up how the community can work hand-in-glove with the Government to ensure Singaporeans enjoy living in a garden environment that is covered with pervasive greenery - a tribute to the half-century islandwide tree-planting campaign that former prime minister Lee Kuan Yew started in 1963. It has become an unbroken 50-year tradition.

The National Parks Board will mark 50 years of tree-planting and greening Singapore by setting aside 1,963 trees for members of the public to plant this year. Anyone who wants to plant a tree in any of the parks pays $200. The more than $470,000 raised will go to enhancing the biodiversity and heritage value of the Singapore Botanic Gardens.

"You have to salute Mr Lee (Kuan Yew), who had a genuine interest in greenery and laid the foundation stone for Singapore to be globally known as the 'Garden City'," says Dr Thomas, 68, the former head of the anaesthetic department of the-then Kandang Kerbau Hospital, who traces his ancestry to Kerala. Born in Kuala Lumpur, Dr Thomas came to Singapore in 1954 when he was nine.

Chennai-born Ms Prakash, 43, renowned as a speaker, trainer and writer who gives talks and conducts workshops on green sustainability and various environmental issues, adds: "We are struck, wherever we go overseas, by how green and beautiful Singapore is. It's a huge achievement for Singapore, a tribute to Mr Lee (Kuan Yew), held in the highest regard and seen as a role model by other cities and countries for being clean and green. Yes, greening raises morale and pride in one's country.

There is a growing body of scientific research that green spaces can increase the well-being of people, by decreasing stress and improving health."

Mrs Mekani, a Karnataka-born businesswoman who came to Singapore 23 years ago, says: "My journey as a 'green' contributor began after I learnt about Singapore's green beginnings. Fifty years ago, Mr Lee (Kuan Yew) had a vision for a metropolitan city, living in the midst of a garden. It was then that I realised this beautiful city I was living in was the result of one man's foresight and aspirations."

Dr Thomas' prize-winning jungle-themed garden and house is vivid proof of his fanaticsm to greenery. His upmarket Art Deco architecture house, surrounded by some extinct forest trees and Kerala- styled landscaping, won him an award from NParks.

Dr Thomas, the son of a priest in the Mar Thoma Syrian Church of Malabar, headquartered in Kerala, feels a man's house reflects who he is... "and I'm proud to be called a 'Green Doctor' as I believe greenery has soul, character and that personal human touch". Tongue-in-cheek, he says friends think he's a "doctor of botany" and not a 40-year practising anaesthesiologist.

He says: "Greenery gives you a great sense of achievement, a sense of peace, away from the bustling city crowd, traffic and fumes. I grew up surrounded by trees and plants in Malaysia and I feel a deep sense of pride to have continued this greenery tradition."

His wife, Anjula, from Indore in Madhya Pradesh, is a pathologist and they have three children, Vidhya, 37, Sudhir, 35, and Shaleen, 25. He continues to actively serve as a senior member of the Singapore Gardening Society and also sits on NParks' Heritage Tree Panel, which was set up to identify heritage trees in Singapore.

Ms Prakash, 43, who graduated from the Indian Institute of Management in Kolkata and later completed a Master of Science (Financial Economics) in the University of London, feels she's an accidental green activist.

"Until 2008, I didn't know I was going to be an environmental or sustainability advocate, given my finance and economics background. Though I have always enjoyed being in the presence of nature since childhood, I began to appreciate the ecology of trees and plants only as a volunteer rainforest guide in the Singapore Botanic Gardens, the year I came to Singapore in 2003," says the mother of two teenage girls, Ananya, 18, and Lavanya, 12.

Her husband Prakash, 43, is an IT specialist. "As I began sharing the interesting flora and the intricate ecosystem of a tropical rainforest with visitors, I researched and read a lot. I discovered that rainforests and the various species within them were disappearing at a rather alarming rate due to palm oil plantations, timber logging and large-scale agriculture," she adds.

"I had an epiphany of sorts that led to a strong sense of urgency about what I wanted to do for the rest of my life. It led me to set up Eco Walk The Talk in 2008, to raise awareness among the public about various environmental issues in Asia."

The portal draws about 25,000 visitors a month, with a Facebook following of over 3,700 and a Twitter following of over 1,700. The website was nominated in the finals of the Asian Environmental Journalism Awards in 2012.

"In 2011, I set up Green Collar Asia, a 'green' jobs portal that helps me engage with an industry audience as well. The vocabulary and messaging are very different, but it keeps me on my toes as I toggle between these two diverse target audiences without losing my core authenticity."

Some of the diverse green campaigns Ms Prakash played prominent roles in include preserving the Rail Corridor (from Jurong to Woodlands) as a green space, supporting the ACRES' campaign for the release of the captive dolphins by Resorts World Sentosa and Nature Society (Singapore)'s effort to protect Bukit Brown from being partially destroyed by the proposed Lornie Road right-lane highway.

She intends to intensify efforts to raise awareness of green issues. She says: "Physical greenery goes beyond pride and morale. Greenery serves as lungs for the island and is critical in regulating local weather, reducing heat islands and also purifying air. It needs to be a core strategy for absorbing carbon emissions."

Likewise for Mrs Mekani, 54, a committed environmentalist to social, green and brown issues, who served as the founding Executive Director of National Council on the Environment (renamed during her tenure to Singapore Environment Council or SEC) from 1993-1996.

"I'm simply doing my part to pay back to society, and especially to nature. Nature gives without discrimination. The oxygen plants produce, the shade trees provide - these help every one of us. I'm taking my cue from nature, and returning the favour by promoting greening in Singapore. This is my passion," she says.

She came to Singapore in 1991 with her businessman- husband, Bharat, 54.

The Mekanis use nature- related gatherings, such as tree-planting events, to foster bonds.

She says: "At our 25th wedding anniversary in 2007, we invited friends, family and the various organisations that we are associated with to plant 250 trees at various parks and nature reserves. Again in 2009, we celebrated both our 50th birthdays by planting 50 trees with friends and family at Dairy Farm Nature Park.

We're doing so again on Oct 19 to commemorate 50 years of greening in Singapore."

Her proudest achievement is helping to develop the Plant-A-Tree programme with the Garden City Fund, SEC and NParks. Under this programme, anyone (individuals, families or businesses) can plant a tree in any of the 300 islandwide parks for $200. She says: "This cost is equivalent to only two trips to the petrol station, yet is enough to grow and sustain a tree, which may grow for 100 years - all the time contributing to our environment by giving us shade, oxygen and a picturesque city to live in."

She says that since the programme inception in 2007, over 13,000 trees have been planted by individuals, schools and corporations.

Mrs Mekani, currently director of CIS Agrifest and also a member of Advisory Board (Singapore), Global Schools Foundation, adds: "In our future, I see a community that takes pride in greenery. We are the collective owner of a natural heritage. We have beautiful parks that are adorned in green. We now have a park connector network that stretches over 200km and connects our parks and nature reserves."

To take it to the next level, she urges Singaporeans, especially in the heartlands of Ang Mo Kio, Bedok, Jurong, Yishun and Tampines, to work together to make it happen. She says: "Biodiversity is not solely the Government's responsibility, it's one that has to be shared by the community.

"We need to roll up our sleeves, get hands on, become involved and take ownership of our green spaces and the environment. Once we do so, Singapore's future as a City in a Garden will truly take flight. We have to realise what we are enjoying today has been someone else's vision and effort, like what Mr Lee Kuan Yew did in 1963.

"Hence, our effort today will be enjoyed and appreciated by someone else in the years to come. If all of us partake in planting trees, we would create a green and caring world for all. It's for our future generations."

This year marks 50 years of greening for Singapore and it is the result of the commitment of the Government and community to enhance the quality of living spaces with a world-class garden city underlined with vibrant parks, lush tree-lined roads and thriving biodiversity.

The greening journey started when former Prime Minister Lee Kuan Yew had a vision to make Singapore distinctive and an attractive place to live in. In 1963, he planted a mempat tree at Farrer Circus, signifying the start of the greening campaign.

Over the decades, various species of flowering trees and plants were introduced. More parks were also developed, and they gradually evolved into green spaces with a wide range of amenities. Conscious efforts were made to conserve the natural heritage, and enhance the wildlife in the urban areas.

Among the major high points of the National Parks Board's half-century celebration has been The Straits Times Run in the Park, where more than 12,000 runners took part on Aug 25 at Punggol Waterway Park. In July, President Tony Tan Keng Yam also launched a first-of-its-kind, biodegradable series of stamps. A collaboration between NParks and Singapore Post, the special stamps come with small moss-rose seeds stickered on its front. Soak the stamp in water for a day and it can be sowed in soil.

A commemmorative book titled Living In A Garden: The Greening of Singapore was also launched.