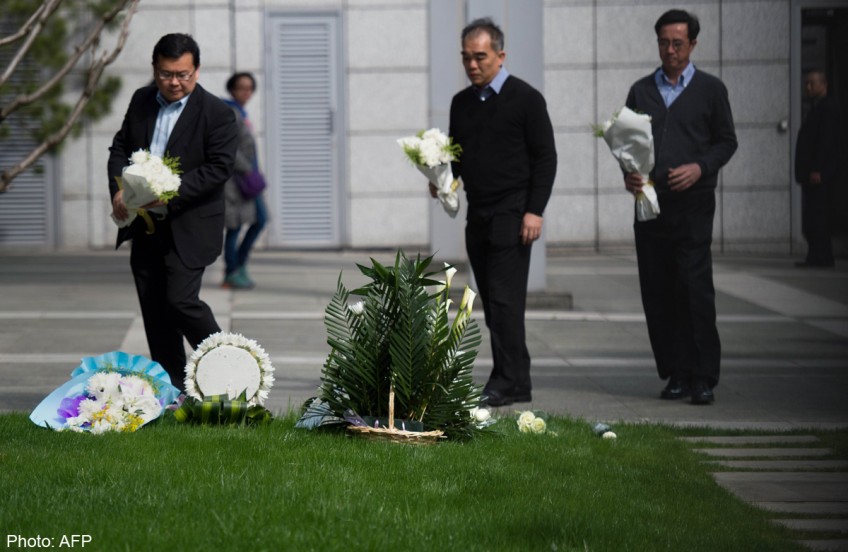 People arriving at the Singapore Consulate in Shanghai to pay their respects to Mr Lee Kuan Yew yesterday.

Asia's dominant powers reacted with sorrow at Mr Lee Kuan Yew's death, praising his achievements and global vision, while at least one foreign state legislature passed a condolence resolution to mourn his passing.

An outpouring of grief and gratitude flowed in China, with President Xi Jinping calling Mr Lee an "old friend of the Chinese people".

Mr Li said Mr Lee's "contributions towards Sino-Singapore ties and China's reform and opening up will surely be recorded in history".

Chinese nationals were among the dozens of people who rushed to sign the condolence books at the Singapore Embassy in Beijing.

Chinese media outlets were awash with obituaries hailing Mr Lee as one of the world's best ethnic Chinese leaders, listing his achievements and how he contributed to China's development.

The NetEase media portal ran a photo spread on Mr Lee's 33 visits to China over 37 years.

On his first trip there in 1976, he met Chairman Mao Zedong.

He was the only Singapore leader who met all five top leaders of China - from Mao and Deng Xiaoping, to former presidents Jiang Zemin and Hu Jintao, to Mr Xi.

"A far-sighted statesman and a lion among leaders, Mr Lee Kuan Yew's life teaches valuable lessons to everyone. News of his demise is saddening," tweeted Mr Modi, known to be an admirer of Mr Lee and Singapore's model of development.

In a condolence message, Congress president Sonia Gandhi highlighted the "warm" ties Mr Lee had with the Congress party and recalled him delivering the Jawaharlal Nehru Memorial Lecture in New Delhi in 2005.

Describing Mr Lee as the "builder of modern multi-ethnic Singapore", Mrs Gandhi said he belonged to the league of Asian statesmen who successfully carried forward the task of nation- building.

In the southern Indian state of Andhra Pradesh, where Singapore is helping to build a capital city, the state assembly passed a condolence resolution and observed two minutes of silence for Mr Lee, who visited India six times as Prime Minister of Singapore.

Said Andhra Pradesh chief minister Chandrababu Naidu in a separate condolence message: "The world will be poorer by the passing away of a visionary leader who created 'an oasis of First World amidst Third World' with his pragmatic outlook and hard work."

He tweeted that he was deeply grieved by the death of Mr Lee, whose "inventive, forward-looking approach inspires global leaders".

As with China, Mr Lee had known the Indian leaders across generations, starting with first prime minister Jawaharlal Nehru.

In the 2005 lecture, Mr Lee described how he shared "intellectual and emotional roots" with Nehru, because he too had "experienced subjugation and discrimination under the British Raj".

In Japan, Prime Minister Shinzo Abe, who met Mr Lee last year, described him as "a man of incomparable leadership and unparalleled insights... one of the greatest leaders of modern times that Asia has ever produced".

They first met when he made an official visit to South Korea in 1979 and had a meeting with her father and then President Park Chung Hee. Ms Park acted as interpreter at the meeting, which cemented bilateral ties.

Additional reporting by Chang May Choon