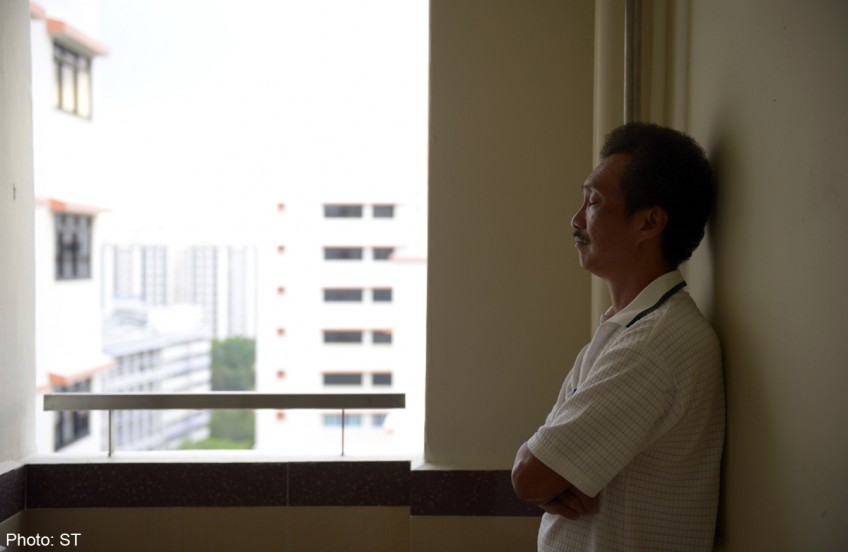 Mr Lee still takes the lift from his fourth-floor home to the 16th floor nearly every night, and spends hours at the spot where his 12-year-old daughter Linda was flung to her death by the family's 16-year-old maid in 2010.

Even today, 56-year-old Mr Lee Kai Yam still takes the lift from his fourth-floor home to the 16th floor nearly every night.

He would stand for hours at the spot where his 12-year-old daughter Linda was flung to her death by the family's 16-year- old Indonesian maid in 2010. One thought would repeat in his head: How much fear did his daughter feel at that moment?

In 2012, the maid, Nurhayati, was found guilty of culpable homicide and sentenced to 20 years in jail. But Mr Lee always maintained that the agency that supplied the underage maid should bear its share of responsibility.

Yesterday, he and his 50-year-old wife finally got the apology they were fighting for.

Mr Ong Kian Wah, a consultant of the now-defunct Maid Link agency, stood up in court and said: "We sincerely apologise for the loss of your daughter. We are also saddened by this incident. We hope you can forgive us and have peace in your heart." Beside him was his daughter Charmaine Ong Meiyi, who was sole proprietor of the firm.

The apology was part of the settlement agreed on by both parties. The Ongs will also pay the couple $50,000 over nine monthly instalments.

But for Mr Lee, it was never about the money. "There are many families here who rely on maids to take care of their children," he told The Straits Times.

"Agents must exercise due diligence in checking the age of maids and ensure they are capable enough to meet the needs of their employers."

Linda had scoliosis - a curved spine - and was slow in her speech and movement. Two weeks after Nurhayati started working for the family in October 2010, Mr Lee found that she did not have the maturity needed to care for Linda, despite documents listing her as being 24 years old.

He went back to the agency to ask for her to be replaced.

But Mr Ong told him she came from a poor family and needed the job. He pleaded with Mr Lee to give her a chance.

Out of sympathy, Mr Lee took her home again.

Less than a week later, on the morning of Nov 24, when Mr Lee had left for work and while his wife was sleeping, Nurhayati carried Linda to the 16th floor of their block in Hougang.

After Linda's death, he wrote to more than 20 lawyers. He wanted the agency to answer how a 16-year-old girl could have been passed off as a 24-year-old maid. Only one lawyer, Mr Chia Boon Teck, replied.

Mr Chia told The Straits Times he remembered reading about Mr Lee and called him down for an interview. When he decided to take on the case on a pro bono basis, he said Mr Lee broke down and cried.

Yesterday, District Judge Koh Juay Kherng asked Mr Ong and his daughter if either was still running a maid agency, then reminded them about guidelines set by the Ministry of Manpower.

"I hope that the guidelines are adhered to strictly in future. You might have no control over what happened, but if you had done what needed to be done, this incident may not have happened," he said.

Maids have to be at least 23 before they can work here.

The Straits Times found that after Maid Link's licence was revoked in January 2011, Mr Ong moved to Maids and Manpower Agency in Katong Shopping Centre. He is now a shareholder of Pertama Employment Agency at the same mall.

After addressing the Ongs, the judge turned to the couple and said: "The court offers its condolences as well, and hope that with this, you can move on to the next stage of your life."

It will not be easy.

Mr Lee, a crane driver, told The Straits Times that Linda had brought him and his wife, a store cashier, so much joy when she was born. Their first child died of asthma when he was 15 months old.

With their income of less than $3,000 a month, they lived a frugal life in order to give as much as they could to Linda. For instance, they bought a large LCD TV on hire purchase as she loved watching the children's show Hi-5.

Said Mr Lee: "We can't bear to switch on the TV as it would remind us of Linda.

"My wife still hides and cries in our bedroom."