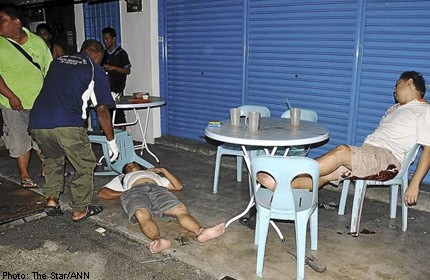 The friends, aged between 30 and 50, were admitted to the Sungai Bakap Hospital after being shot on their legs, arms and buttocks. Their condition has been reported to be stable.

One of the victims, factory van driver R. Balasundram, 53, said he had gone to the coffeeshop shortly after 10pm on Friday for drinks after sending some workers home.

"I spotted five of my friends there and decided to join them. While drinking, I noticed two men on a motorcycle riding by very slowly," he recalled. "Suddenly, I heard a loud noise. I thought someone was playing with fire crackers before I realised that they were gunshots," he added at his home in Transkrian.

Balasundram, whose leg was grazed by a bullet, was discharged at 1.30am yesterday.

Penang police chief Senior Deputy Comm Datuk Abdul Rahim Hanafi said a man had suddenly whipped out a pistol and opened fire randomly at the group of friends before speeding off on a motorcycle.

"The victims were rushed to the hospital by passers-by."

Asked if the shooting was linked to Gang 04, he said it was still too early to tell, adding that the investigating officer was trying to determine the motive.

SDCP Abdul Rahim said the case has been classified as attempted murder under Section 307 of the Penal Code.

Meanwhile, South Seberang Prai OCPD Supt Shafien Mamat said police would only record statements from the victims after they had been discharged from the hospital.

He urged witnesses to come forward by contacting the Rakan COP hotline at 04-2691 999 or to any police station.

On Monday, five suspected Gang 04 members, believed to be linked to nine shooting cases this year, were shot dead by the police.

[[nid:34042]]
SUBSCRIBE TO OUR NEWSLETTER
Your daily good stuff - AsiaOne stories delivered straight to your inbox