Harvard president: Singaporeans have much to contribute to discussions at university 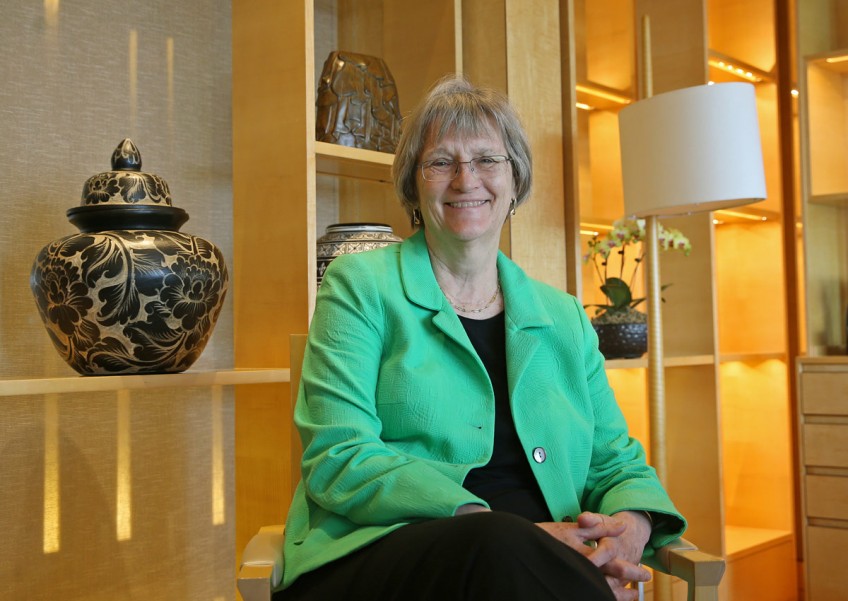 In a conversation with outgoing National University of Singapore (NUS) president Tan Chorh Chuan on Tuesday, Harvard University president Drew Faust was struck by how alike their challenges are.

Harvard is ranked the world's sixth-best university, while NUS is 24th globally and Asia's best.

Speaking exclusively to The Straits Times after that meeting, Professor Faust said: "I had a great conversation with Chorh Chuan… Here we were, (from universities that are) 9,000 miles (14,500km) apart, and thinking about so many of the same issues. It was overwhelming."

These issues, she added, included lifelong education, data science, what undergraduates expect of grading and, in general, what students should know to thrive in a future with robots and other forms of pervasive technology.

On the last, Prof Faust mused: "We just ought to let the 11-year-olds run the world because their attitude is 'This is just how it is'. When you're older, it's 'I have to learn this, I have to adjust to it'. But for 11-year-olds, it's like breathing."

She herself was eager to learn more from Singapore on two scores: How data science is evolving at NUS and how Singapore will make its new general education system work.

Her university is revving up "on every level" for the digital future, from creating robotic bees to pollinate plants, to studying the impact of digital media on society, privacy and security.

Then there are Harvard's 90 online courses, whose topics range from neuroscience to poetry and which are part of a global teaching project that it initiated with the Massachusetts Institute of Technology. Over three million people - half of them outside the United States - have taken the courses, she said.

Asked if she would explore with Singapore institutions the sort of "global international alliances" that are a key prong of Singapore's economy, Prof Faust, 69, said that she would let that happen "naturally" between her individual colleagues and universities here.

She noted how Singapore's top leaders, including Prime Minister Lee Hsien Loong - who has a Master of Public Administration from Harvard - and founding prime minister Lee Kuan Yew, engaged and advised Harvard for many years.

"That's been extremely important over the years," she stressed, adding that there are about 130 Singaporeans studying on her campus in Cambridge, Massachusetts.

As to how much of an impact Singaporeans have made on Harvard, she said that they have much to contribute to discussions there, especially on issues like how Singapore deals with traffic congestion, land reclamation and climate change.

Prof Faust became the first woman to head Harvard in 2007 and is celebrating her 10th year this year as its 28th president.

Among the biggest feathers in her cap in that time was ensuring that brilliant minds from straitened circumstances have a place at her university, chiefly by increasing financial aid.

As she told Fast Company magazine in 2014, one-fifth of her students came from families earning less than US$65,000 (S$91,000) a year, with three out of five of them receiving financial aid - up from nearly half (48 per cent) before she became president.

"We try to create a community in which everyone feels that this is a place where they belong and that Harvard belongs to them," she said.

Broadening access to Harvard thus is also her salvo to the increasingly anti-expert and anti-elite. Noting that Harvard's motto is Veritas - Latin for "truth" - she said that she is countering the clear "resistance to expertise and facts" today by extending such financial aid to foreign students too.

About a quarter of Harvard's student population is from outside the US.

Continuing to welcome these students, she stressed, is her way of "enlisting people in feeling that we have legitimacy, that we are not closed off on some arbitrary basis".

Embracing diversity is "extremely important" to her too, because she has benefited from it.

"The idea that Harvard has a female president would have been unimaginable such a short time ago, and so I embody a kind of change in the community," Prof Faust said.

She said some at Harvard, who might have initially reacted to that change with thoughts like "Umph, a woman. What's this about?", adjusted quickly because they saw that if they helped her to succeed, Harvard would succeed too.

Still, she had other bumps to overcome, which she did by "listening hard" to colleagues and stakeholders.

Recalling her first days as president, Prof Faust said: "I could hear little noises like, 'Maybe she's too nice.' I think I've now educated the community that you can be both nice and tough, and that nice is a good thing… Nice and strong are not contradictory."