A donation of $200,000 by the Indonesian-Chinese tycoon Bachtiar Karim’s family to Singapore badminton star Loh Kean Yew underscores the player’s rising popularity in Indonesia, which has its own set of top-flight players for fans of the sport to cherish.

This week, the Karim Family Foundation awarded Loh the sum for winning the Badminton World Federation World Championships, hoping the cash would motivate the player to realise his Olympic gold medal dream.

Loh, now ranked as the world’s number 15 in men’s singles, competed at the 2020 Tokyo Olympics, where he was defeated by Indonesia’s Jonatan Christie in the group stage.

The Karim family comprises brothers Bachtiar, Burhan and Bahari, who run the Singapore-headquartered palm oil company Musim Mas. Bachtiar, 65, is estimated to have a net worth of US$3.5 billion (S$4.7 billion), making him Indonesia’s 10th richest person last year, according to Forbes.

Loh, through his own efforts, also seems to have found the key to winning over Indonesian fans. Since November, the 24-year-old has been tweeting in Bahasa Indonesia while taking part in both the Indonesian Masters and Indonesian Open tournaments, held on the resort island of Bali.

In the Masters he was defeated by Taiwanese player Chou Thien-chen in the round of 16; in the Open, he was runner up in the men’s singles.

On Nov 16, he tweeted a video showing him receiving a gift – a box of cake from Indonesia’s Hendra Setiawan, the world’s number two men’s doubles player.

He shared a video of him unboxing the cake – captioning it “mantap” (delicious). In the video he can be heard shouting “gila” (crazy) – in a true Indonesian accent.

A Twitter user @mijwakhalif replied: “Can you really speak Bahasa Indonesia?”, while another commented “where are you from really? How come you speak ‘gila’ so masterfully?”

Another fan quipped that Loh was born in Malaysia (he was born in Penang), so he learned Malay and still can speak it even though he is Singaporean.

Another pointed out that Singapore’s national badminton coach is Indonesia’s Mulyo Handoyo, a celebrated trainer who helped Taufik Hidayat win a gold medal in badminton for Indonesia at the 2004 Olympics.

Eight days later, the player – whose greatest achievement so far is winning the 2021 Badminton World Federation World Championship in Huelva, Spain, last month – tweeted a photo of himself enjoying fried duck with sambal, an Indonesian spicy condiment, with a Bahasa Indonesia caption that translates into “this duck thigh is really good!”

The reason behind his use of Bahasa Indonesia to address his more than 17,000 Twitter followers is unclear. Loh did not immediately respond to This Week in Asia’ s request for comments.

But whatever the reason, it certainly hasn’t hurt his popularity. Bachtiar’s daughter Cindy is among those to have complimented Loh.

She told Singapore newspaper The Straits Times: “We’ve been following Kean Yew’s career since he beat [China’s top player] Lin Dan in 2019. When we watched him again in his games [at the world championships], we knew he’s definitely here to stay.

“He definitely has immense potential to become one of the top players in the world. And especially being the first badminton champion from Singapore, we really find him even more exceptional.”

The paper also quoted Bachtiar’s son, Chayadi Karim, in his remarks to Singapore Chinese-language newspaper Lianhe Zaobao, in which he said: “I feel Loh Kean Yew is an impressive young man. Competition among badminton’s elite is very intense. One needs not just good technique, but also strong will to succeed. I have observed this young man for a long time now and I very much admire his indefatigable spirit.”

“We hope Kean Yew can continue playing good badminton without any worries. We want to show that it is good to pursue sports not just as a hobby, but also as a career. We hope more young aspiring athletes will follow in his footsteps so that Singapore’s sporting standards can be raised,” Chayadi said.

Loh said he was “very grateful” for the donation by the tycoon’s family, calling it a “recognition of [my] hard work and sacrifices”.

“There are too many people who have helped me in my life and I can never thank them enough. Without all the support and encouragement, I wouldn’t be standing on the podium,” he said.

Loh quit school at the age of 17 to pursue his professional badminton career, which took off in meteoric fashion last year after the Olympics. His ranking jumped from world no 41 to 20 in seven weeks following his victories in the Dutch Open 2021 and Hylo Open in Germany.

While he was the first Singaporean player to win the World Championships, the tournament does not pay cash prizes.

Fans then raised more than $130,000 for him and began referring to him by his initials “LKY” that he shares with the city state’s founding father Lee Kuan Yew. 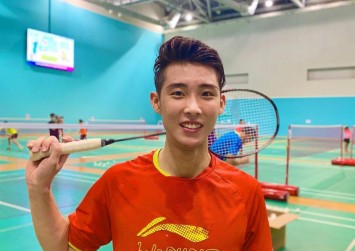 “Of course, it will be better if [Bachtiar] Karim, who is an Indonesian, also gives an equal amount, or even more, to Indonesian athletes, as we have plenty of them,” Djoko said.

He said it was not surprising that Loh had a following in Indonesia.

“We used to have Rudy Hartono, a legendary player whose fans came from all over the world, not only Indonesia. So it is only normal that Loh, who at 24 has already won a world championship tournament, has many fans in Indonesia.”

Djoko said the next four years would be important in Loh’s career, as “badminton players, theoretically, typically score achievements when they are 24 to 28 years old”.

“But it all depends on his training, his coach, because there are players that are older than 30 years old and still winning tournaments,” he said.