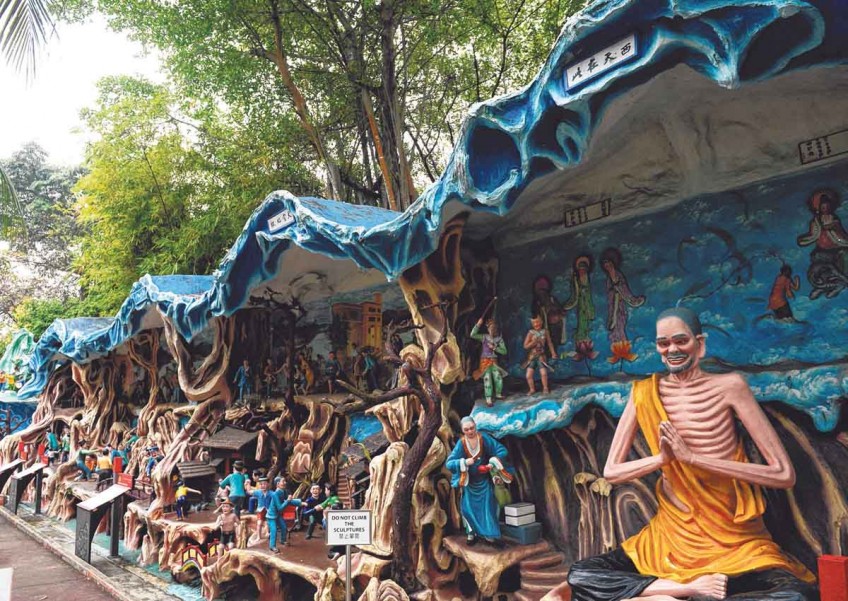 Haw Par Villa is about to undergo yet another makeover to restore it to its former glory - the latest move after previous efforts to revive the park did not quite take off.

The park in Pasir Panjang is rich in Chinese folklore and mythology and, in the 1970s and 1980s, used to draw over a million visitors a year with its quirky statues and gruesome depiction of the underworld.

These days, however, only an estimated 200,000 people visit every year and there are now plans to give the park a boost.

The Singapore Tourism Board (STB), which owns the 78-year-old park, has appointed tour operator Journeys to manage it for the next three years.

Journeys is not coming in cold. Over two weekends last year, it took 2,500 people on guided tours of the park during a tourism festival. The operator will experiment with various initiatives over the next 12 months to determine what works for the park, managing director Jeya Ayadurai told The Sunday Times.

For a start, Journeys will set up a visitor centre by early next year and introduce daily tours led by its staff.

Entry to the park will remain free, but the hour-long guided tours will cost between $10 and $15. Audio tours and mobile apps will be added later.

Refurbishment and repairs will be done from January, the STB said, including mechanical, electrical and structural work. The park will remain open during this period.

A gift shop and five dining outlets, including a food court and a fine-dining restaurant, will be added in unused spaces in the park. There are now no retail or food outlets in the park.

The park, which opens at 9am daily, may also have its opening hours extended past the current 7pm, if the authorities approve.

"It's important that we ensure that the soul (of the park) is protected and it's not overly commercialised," he said. "But it has to be able to generate sufficient income... and be sustainable."

He said there was "significant trepidation" among his company's board members regarding Journeys' involvement with the park, noting that former operators had found it a challenge.

In 2006, the $7.8 million Hua Song museum, dedicated to the Chinese diaspora, opened in the park. It closed in 2012 after its operator, citing poor visitor figures, decided not to renew its contract.

Explaining the decision to manage the park, Mr Ayadurai said: "We feel that we have captured a gem from a lost time, a lost era.

"It has lost a little bit of its sparkle, but the essence of it is still a very strong story. What we want to do is to bring an understanding of this place to the public."

Haw Par Villa, or Tiger Balm Gardens as it was called back then, was built in 1937 by Mr Aw Boon Haw as a residence for his younger brother, Boon Par. Both were philanthropists who made their fortune selling the medicated oil Tiger Balm.

The elder Mr Aw added statues from popular Chinese folklore such as the Eight Immortals and Journey To The West to the park as he wanted it to be a venue for Chinese culture to be remembered.

Dr Michael Chiam, Ngee Ann Polytechnic's senior tourism lecturer, said any addition to the park, whether a programme or dining outlet, should be consistent with its oriental or Asian theme.

"There are people still interested to rediscover the place," he said.

"These carnivals are not so common any more," he said. "The statues should be kept there, that's what makes the park special."

HAW PAR VILLA THROUGH THE YEARS

1942 - 1945: To escape the Japanese invasion, Boon Par fled to Burma (now Myanmar), where he died two years later, while Boon Haw went to Hong Kong. During the invasion, the Japanese used the park as an outpost to keep an eye on ships at sea. After the war, Boon Haw returned to Singapore, repaired the damage done to the park and gave it to Boon Par's son, Mr Aw Cheng Chye.

1979: The Aw family handed the park to the Singapore Tourist Promotion Board as they were unwilling to continue running it.

1986 - 1990: International Theme Parks took over the park, expanded it by five times to 9.5ha and gave it an $80 million facelift. It was renamed Haw Par Villa, in honour of the two brothers.

2001: The park was returned to the Singapore Tourism Board (STB), which hired Orient Management to manage the place. The park was stripped of its rides and returned to its previous state as a public park with statues.

2012: Hua Song museum closed after its operator decided not to renew a contract to maintain and run the facility.