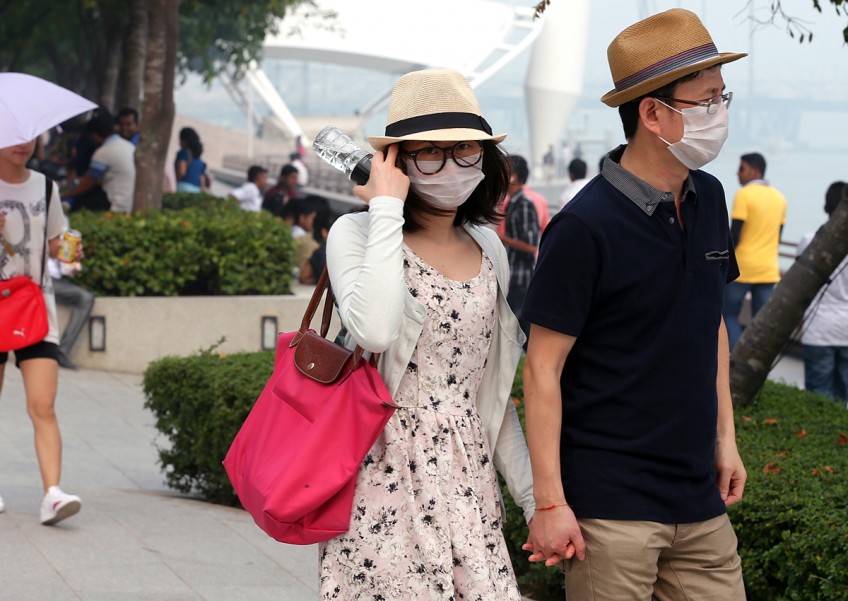 It was the one good thing that came out of the haze.

And then it wasn't.

And I'm not talking about Friday being declared a "voluntary non-work day" by the Ministry of Manpower (MOM).

The announcement turned out to be a hoax.

Did anyone even fall for it?

Just because we had two extra public holiday this year (Jubilee Weekend, Polling Day), do we assume that public holidays simply fall out of the sky now?

But what made the "voluntary non-work day" announcement so credible was that the Ministry of Education (MOE) had announced on Thursday night that school would be cancelled the next day because of the haze.

Of course not. But then the "voluntary non-work day" wasn't even an outright holiday.

According to the fake MOM announcement, civil servants got only half a day off and employers were merely "encouraged" to give their staff a "paid day off".

I suspect the haze had already "encouraged" a few employees to get an MC anyway.

But you know who can't get an MC? My wife.

That's because she's a stay-at-home mum.

And even though she's a mum, she's not under MOM.

But the haze has affected her too.

The one thing she hates most about being a stay-at-home mum is waking up early every morning to get our two teenage children ready for school.

If she doesn't wake up, the kids don't wake up. No non-human alarm clock can rouse my children from their coma-like slumber.

Because I work late, I sleep through the whole thing, so I don't care.

On Thursday night when MOE announced the school closures, no one was happier than my wife. She was going to sleep till noon the next day.

Finally, something good came out of the haze.

Then the other shoe dropped.

She found out that only primary and secondary schools were closed.

My daughter is in Secondary 4 and my son is in his second year of junior college.

So my wife still had to get up early for my son.

She felt like she was hit by a Formula One car driven by Sebastian Vettel near turn 13 at the Singapore Grand Prix.

Why, MOE? Why did you cheat my wife's feelings like that?

Only I can do that.

Why didn't you close junior colleges too? Is the haze rated NC16, suitable only for persons aged 16 and above?

It must be because of the obscene PSI readings.

On Thursday, the PSI was so high that Pizza Hut, McDonald's and KFC announced that they were suspending home delivery - just like in 2013.

That's when you know the end is nigh - when you can't go out to get food because of the haze, and the food can't come to you.

On the Pizza Hut Facebook page, someone wrote: "No worries, I will order Canadian Pizza."

Ironically, the next day, when MOE closed the schools, the haze situation apparently improved enough that the food companies resumed their delivery services.

So did MOE jump the gun? Or Pizza Hut?

Ask the people queueing outdoors for the new iPhone 6s.

I just flashed back to June 2013 when people were queuing for the black Hello Kitty doll at McDonald's in the haze. I was one of them.

But unlike Friday, schools weren't closed in 2013 because the haze happened during the June school holidays.

Surprisingly, my son didn't feel any resentment that he had to go to school on Friday in the haze and his sister didn't.

My daughter, on the other hand, resented that her chemistry teacher gave her more homework via WhatsApp.

Her teachers weren't that happy they had to go school on Friday in the haze too.

My daughter's history teacher used not one but two crying face emojis in a WhatsApp message to his class.

My wife knows how he feels.

Can teachers complain to MOM?