He becomes teacher to be a better dad 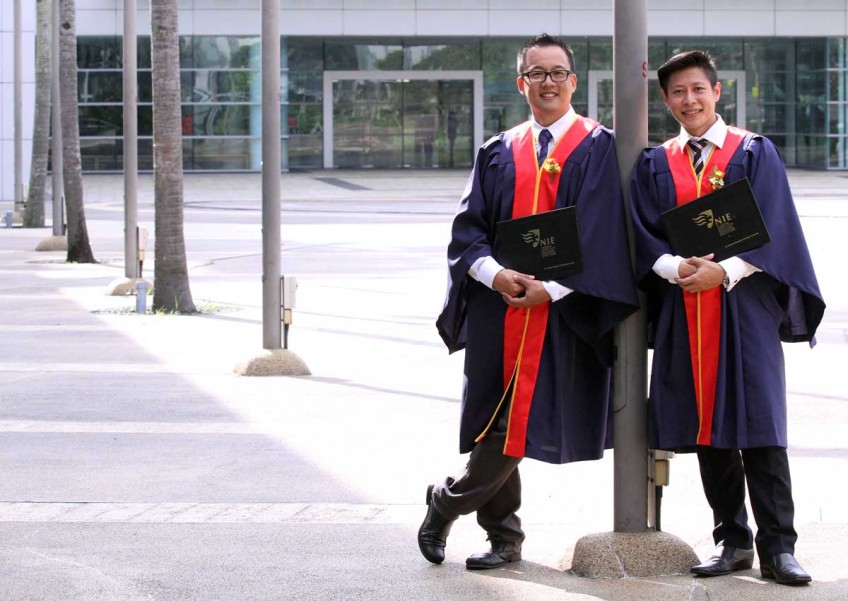 Mr Jonathan Chng's father was in a hospital bed dying of cancer when he asked his son a question that would change his life.

His father's question to him: "You and I have shared memories from the times we spent together, but do you have any with your sons?"

Mr Chng remembers that moment well as it jump-started his journey to becoming a teacher and a better father.

Then an operations manager at an engineering company, he spent 13 hours a day on the job.

He was also voted valedictorian of his cohort by the Office of Teacher Education.

It all started in 2012, when Mr Chng found out that his father was dying of cancer. He took two months of leave to care for him.

He said: "During the two months, my dad and I talked a lot about our shared stories from when I was younger."

Once, they reminisced about the time his father taught him to ride a bicycle when he was in Primary 1.

Mr Chng, who has two sons, aged four and 11, said: "He was even riding a children's bike to encourage me."

About the question that changed his life, Mr Chng said: "I immediately broke down in tears in a corner where my father couldn't see me."

He realised he was losing out on his two sons' growing years.

After his father died in June that year, Mr Chng became a relief teacher at Meridian Primary School, where his older son was studying.

He was hoping to spend more time with his children while learning various teaching methods to provide them with academic support.

Mr Chng then spent a year as a contract teacher there and realised that teaching was his calling.

He said: "I feel immense satisfaction when I see students applying what I have taught them, including values such as respect."

In 2014, he enrolled in NIE, specialising in teaching physical education to primary school pupils.

But he was worried about his age and his ability to keep up with the pace of learning.

Two weeks into the course, Mr Chng knew he would get along with his much younger classmates and handle the pace.

Mr Amin Mokhtar, 29, who was Mr Chng's classmate for two years, described him as a friend who is young at heart and generous with advice.

"(Mr Chng) even gives me advice on marriage and having kids," joked Mr Amin, who is getting married this year.

Mr Chng has been teaching at Westwood Primary School since the start of this year.

Inspired by his late former teacher

The death of his former teacher led Mr Ng Jun Kiat to rethink what was important in his life.

Mr Ng, then an internal auditor in the finance industry, was earning much more than what he is paid as a teacher now.

But he did not like what he experienced in his three years in the finance industry.

Mr Ng, 31, said: "He was caring and sincere and he engaged students at a personal level.

"His death was the main driving force behind my decision to switch to teaching."

The next year, Mr Ng left his job to pursue teaching.

He graduated yesterday with a Postgraduate Diploma in Education (PGDE) for physical education (PE) at a primary school level.

Mr Ng chose to teach PE because he felt that there are many opportunities to teach his pupils important values when they are interacting with one another while playing sports.

He also recalled a "tumultuous journey" he had as a contract teacher teaching PE and mathematics in 2013.

His pupil was scoring single digits for his preliminary examinations for the Primary School Leaving Examination (PSLE).

Mr Ng helped by engaging the boy with what interested him.

Mr Ng said: "He dreamt of being a Nascar driver so I used the salaries of Nascar drivers to interest him in mathematics."

The student later passed his PSLE.

She added: "He would always be so excited to share the day's events in school with me.

"He has always been a very patient person so I'm glad that he has found a rewarding career."

Mr Ng has been teaching at Greendale Primary School since the start of this year.

He said: "I try to impart values to students whenever I can to give them a holistic education.

"This was also what Mr Poulier strongly believed in. I think he would be proud of me."

This article was first published on January 13, 2016.
Get The New Paper for more stories.