'He cared for the people and gave us a better life' 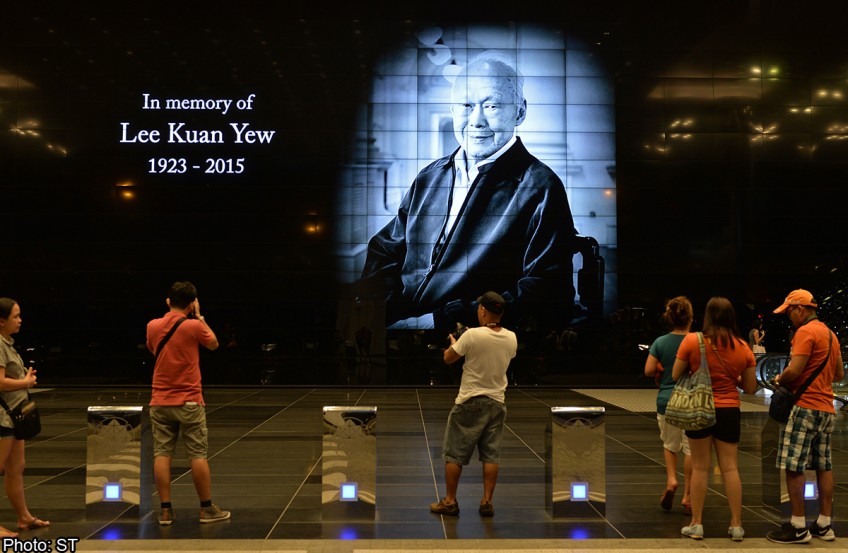 A tribute to former Prime Minister Lee Kuan Yew at Suntec City. At tribute centres such as Tampines Community Plaza, more than 2,500 people had turned up by mid-afternoon and more than 800 handwritten notes were left on a large board with a portrait of Mr Lee.

MADAM Koh Choo Neo had three children, was 20 years old and struggling to make ends meet when she decided to see her MP for help.

She lived in Tanjong Pagar, so she went to see Mr Lee Kuan Yew.

"I had no education and no job prospects. He could not give me financial help but he told me to endure, work hard and look forward," said Madam Koh, now 77.

"His words gave me the courage to go on, and that reminder to work hard guided me through the ups and downs in my life."

She was at Tampines Community Plaza yesterday morning and stood in line with other Tampines residents to leave flowers and messages for Singapore's first Prime Minister, who died on Monday.

When her turn came, Madam Koh bowed her head in prayer and then placed a bouquet of lilies on a table in front of Mr Lee's portrait.

"With his effort, all Singaporeans have a home and clean water to drink. I pray that his spirit and soul will rest in heaven," she said.

By mid-afternoon, more than 2,500 people had visited the tribute centre and more than 800 handwritten notes were left on a large board with a portrait of Mr Lee.

Over at Parliament House, sales manager Tafline Tay, 40, showed up in the afternoon, despite having her injured right leg in a cast.

Like hundreds of other working adults, she wanted to pen a note to express her feelings.

"Mr Lee did what he had to do for us to enjoy a First World city now," said Madam Tay.

She said she did not always agree with Mr Lee's style of running Singapore.

She studied in an Australian university and read books that were banned here when she took political science classes.

"I felt at the time that Singapore had many restrictions on freedom that I did not fully agree with," she said.

But she changed her mind when she started working and had to worry about bread-and-butter issues.

"I realised that there were sacrifices that had to be made for the many things that I now appreciate, like the safety of our streets, accommodation for the poor and retirement savings through the Central Provident Fund scheme," she said.

"She said he is a giver: He gave us Singapore, he gave us comfort and he gave us peace. She came to Singapore before independence and she said no one cared, but he cared for us. So I think we should remember him as someone who cared for us and changed our lives," he said.

He was at Ang Mo Kio Central Stage, where a tribute site for Mr Lee was set up for residents.

Health attendant Teng Poh Geok, 57, said she had never interacted with Mr Lee but knew he was a great man from listening to stories her father, a long-time grassroots leader, had told her.

"My father told me he was strict and fierce but only because he did what he thought was right, even if others were against him," said Madam Teng, fighting back tears.