He fantasised about stabbing women, touching their breasts 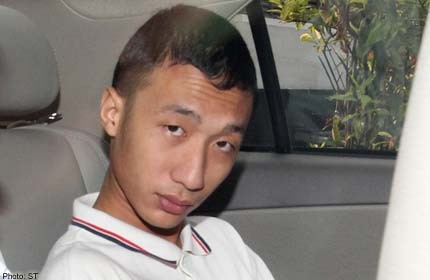 SINGAPORE - He followed young women for short distances - sometimes stopping when they went into a lift or got close to their school. He liked them in their 20s and early 30s, slim and with long hair.

As he tailed them, he would fantasise about stabbing them in the back and touching their breasts. Unfortunately for four women, over eight months in 2010 the gruesome fantasy became a reality.

The fourth woman he knifed - Ms Hoe Hong Lin, 32, mother of two young children - died. Soh Wee Kian (above), 23, a full-time national serviceman (NSF), was later tracked down by police and charged with her murder.

He pleaded guiltyon Tuesday to a reduced charge of culpable homicide not amounting to murder, and a charge of voluntarily causing grievous hurt to another woman, Ms How Poh Ling, who had been the third victim in his series of attacks.

Charges from two other attacks in January and February that year were taken into consideration.

The court heard that on Sept 22, 2010, at about 3pm, Soh had left his house with a plastic glove in his left trouser pocket and a knife in a plastic sheath in his right. He had stolen the knife from an Ang Mo Kio shop a few days before.

He had wanted to follow girls while having a feel of the knife and glove, and imagined stabbing them in the back. The glove was also to wipe off fingerprints from the knife.

After leaving his home, Soh loitered around Woodlands, where he lived. He started following a few girls as he was attracted to them, but would stop after stalking them for short distances.

He later went to some HDB blocks near Mandai Tekong Park, following four women separately for short distances. He fantasised about stabbing them in the back and touching their breasts, but did not do anything to them.

At about 8pm, Soh began walking around Mandai Tekong Park, looking for women with long hair and wearing skirts. He was attracted to long-haired women in short skirts.

He spotted people playing with lanterns and candles, and realised it was the Mid-Autumn Festival.

He felt sad as he could not afford any candles or lanterns for his younger sister to play with. So he was on the lookout for valuable items he could snatch from people there, to buy these for her.

At about 9.15pm that night, Ms Hoe was celebrating the festival with her husband, her then nine-year-old son and three nephews at the park.

The administrative assistant, a Malaysian and Singapore permanent resident, also had a then four-year-old daughter who was staying with her mother-in-law in Malaysia.

At about 10.30pm, Ms Hoe's sister called, asking for the nephews to go home. Ms Hoe walked her two younger nephews to a traffic light at the junction of Woodlands Avenue 5 and Woodlands Drive 50, watched them cross the junction safely towards their home and turned back.

Soh had been at the void deck of Block 895C Woodlands Drive 50, and saw her walking towards the park. He found her back view attractive.

Ms Hoe was looking at her iPhone while walking. When he saw this, he thought of snatching the phone from her.

About this time, another woman was walking in the same direction as Ms Hoe. Soh was attracted to her as well, and he trailed the two at a distance.

But the other woman turned into a HDB block just before reaching a stretch of pavement leading to the park, as Ms Hoe continued on the path.

Having seen her face, Soh was attracted to Ms Hoe's looks and decided to follow her. He trailed her, taking the glove out of his pocket and putting it on his left hand.

As Ms Hoe walked along the pavement and was about to reach a basketball court, he took out the knife, took off the plastic sheath and threw it to the ground.

Next page: He stabbed her in the chest, and near the heart

Sometime between 10.30pm and 10.53pm, Soh came up from behind Ms Hoe, covered her mouth with his left hand and stabbed her in the right lower back with the knife.

He pulled out the knife and Ms Hoe fell screaming. He stabbed her several more times with the knife, including once in the chest, near the heart.

As she lay dying, Soh tried to cover her mouth to prevent her from shouting and drawing attention. He also thought of touching her breasts, but she grabbed both his hands. He shook his hands away from her and ran off.

Several witnesses who were at the basketball court heard Ms Hoe's screams.

They saw her collapsing onto the pavement and when they approached her, she was lying face up, bleeding from a tear on her blouse near her chest, and gasping for air. She did not respond to their attempts to talk to her.

One of the witnesses called the police. Another called for an ambulance.

In the meantime, Soh, who was escaping, broke the blade of the knife from its handle, and threw the blade onto a nearby grass patch.

He continued running home. Along the way, he wiped the knife handle on the T-shirt he was wearing to remove any fingerprints, and threw the handle into a drain near a multi-storey carpark.

Upon reaching his Woodlands home, Soh removed his T-shirt and used it to wrap the plastic glove, which had blood on it. He put the T-shirt in a plastic bag, took the bag out and threw it into the common rubbish chute on his floor.

He also bandaged the cut he sustained from breaking the knife blade.

Then he went back in and joined his younger brother in watching television. The plastic glove, knife handle and T-shirt were never recovered.

On Tuesday, her husband, Mr Ng Kak Joo, sat expressionless as details of the attack on his wife were read out in court.

When approached to comment, he declined and drew away, visibly tearing up. Soh is scheduled to be sentenced on Thursday.

How he was caught

SOH Wee Kian went absent without official leave (AWOL) from national service on Sept 16, 2010, and surrendered himself on the morning of Sept 30, 2010, after which he was transferred to the Singapore Armed Forces Detention Barracks.

He had reportedly been in the navy.

The police traced the attack on Ms Hoe Hong Lin to him and he was arrested on Oct 15 the same year at the detention barracks.

At a police press conference on the day of the arrest, then Criminal Investigation Department director Ng Boon Gay reportedly said the four cases were difficult to solve due to the random nature of the attacks, the lack of witnesses with a clear view of the suspect and the fact that none of the victims was believed to have known their attacker.

Police had recovered a knife blade 12cm long from the scene and a plastic sheath 20m from the blade. Forensics played a key role in the case, Mr Ng said, adding that they identified Soh's approach route and travel patterns and had clues from 10 witnesses as well.

I blame myself for him: Dad

HE DID not expect Ms Hoe Hong Lin's family to forgive his son - he only blamed himself for not teaching Soh Wee Kian well.

"My regret is lifelong," Soh's biological father, Mr Soh Piah Sing, 51, told reporters on Tuesday. He said he had been living in the same flat as his son till Soh was about 16 years old.

But he was working the night shift at a factory and his wife met another man, now Soh's stepfather.

"I hope my son takes responsibility for his offences," said Mr Soh.

Soh's mother, stepfather and younger brother were also in court on Tuesday.

They sat sombrely through proceedings and left immediately after the session, donning sunglasses and quickly walking away.

Next page: Victim traumatised after attack

The woman who got away

ON MAY 26, 2010, at about 7am, NSF Soh Wee Kian left his home with a black leather glove issued by the Singapore Armed Forces and a knife that he bought from a Woodlands shop a few days before.

He took a bus and got off opposite the Sembawang MRT station before wandering around the HDB blocks in the area.

Spotting many students on their way to a nearby school, he followed a few schoolgirls, stopping only when they were about to reach the school.

He loitered around other HDB blocks in the area and followed a few girls at the void decks.

He had put the glove on his left hand as he followed, imagining them being stabbed in the back. He also imagined touching their breasts and kissing them on the mouth, the court heard.

He stopped following some of them when they entered a lift and followed other girls to a market nearby. After a while, he went to the Canberra Road area, following some girls at the HDB blocks, imagining stabbing them with a knife.

He would occasionally feel the handle of the knife in his pocket as he followed them.

The administrative staff member, who was on her way to work, was listening to music on her portable music player and did not see anyone.

Soh stalked the Malaysian work permit holder. When he was close, he suddenly stabbed her in the back and pulled out the knife, as she fell and screamed for help.

Ms How used her handbag to protect her face and upper chest as she saw him thrusting the knife at her. Soh turned and ran away.

After he ran a short distance away from the scene, Soh broke the knife with his hands.

He ran until he reached the bus stop and threw the glove with the blade and knife handle into a small drain behind the bus stop.

Soh boarded bus service 169. During the journey, he saw some girls boarding the bus and kept thinking of touching their breasts and kissing their mouths.

After the bus stopped at the Ang Mo Kio bus interchange, he wandered around the area before taking another bus home.

The attack left both physical and psychological scars on Ms How.

In her victim impact statement, she said she continues to feel pain in her abdominal area, where she was operated on.

Although she returned to work after the attack, she would have nightmares and was wary to the point of being afraid even of female strangers.

She depended on a colleague to accompany her whenever she left her workplace for home, but when her colleague resigned, she felt helpless and could not bear to travel alone.

Ms How eventually resigned from her job in June last year and resumed counselling in July the same year. She had been counselled in 2011.

She also moved to another neighbourhood away from Sembawang to help herself forget the attack.