He had Malaysia's interest at heart too 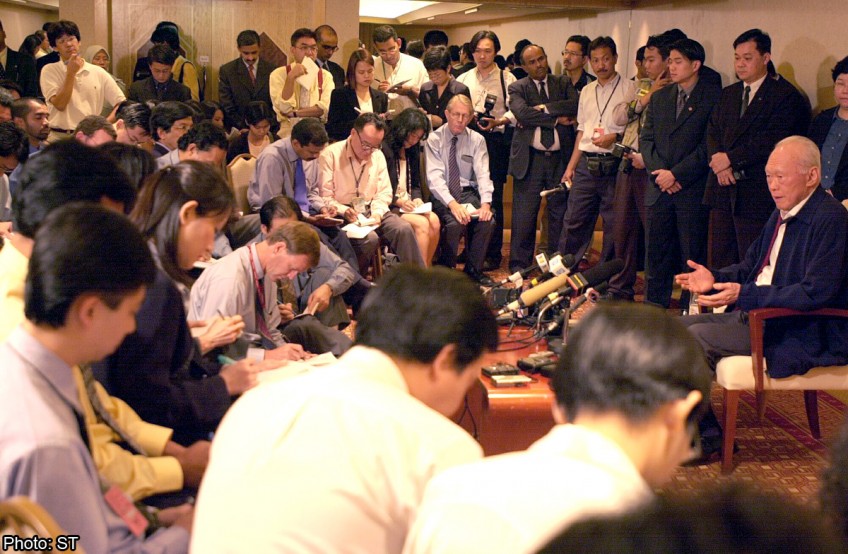 AUG 17, 2000: Senior Minister Lee holding a press conference at the Mandarin Oriental Hotel in Kuala Lumpur. Mr Lee was the only Singapore leader who had personally known all of Malaysia’s prime ministers – from Tunku Abdul Rahman to Datuk Seri Najib Razak.

IT WAS August 2000 and Mr Lee Kuan Yew's first visit to Malaysia in 10 years. A series of small meetings had been arranged for him.

I was chosen to meet the legendary founding father of Singapore with five other young newspaper editors.

We were well aware of his reputation for being intimidating and intellectually arrogant. We had all heard enough stories of him expecting members of the media to be well prepared for any interview he granted.

But he was pleasantly relaxed. It was his three aides who looked tense as they took notes.

"Young man, speak your mind. Tell me what you think. I am not a mind reader," he said, looking at me to start the discussions. And the off-the-record conversation flowed from there.

The issues dividing Malaysia and Singapore included Malaysia's supply of water to Singapore, the relocation of Customs and Immigration facilities for Malaysian rail passengers in Singapore and the withdrawal of Malaysian funds from the island republic's pension scheme.

It was clear that he was very much in the picture even if he was no longer in the driving seat.

After all, Mr Lee remained the only Singapore leader who had personally known all our Malaysian prime ministers - from Tunku Abdul Rahman to Datuk Seri Najib Razak.

He was clear on how his peers built up Malaysia, even as he had his own vision for Singapore and the historical linkages between the two neighbours.

But there were two issues that nagged him during our meeting - Anwar Ibrahim and Parti Islam SeMalaysia (PAS).

He made no secret of his concern that young Malays were drawn to PAS. It disturbed him that the Islamist party was becoming a serious player in the political landscape, with only moderate Muslims and non-Muslims keeping it from becoming more influential.

The growing influence of PAS and the controversial issues with regard to race and religion may have been a Malaysian problem, but it was also a cause for concern to the predominantly Chinese population of Singapore.

The current push by PAS for the implementation of hudud laws would have disturbed him greatly. He would have been shocked to learn that Umno representatives in the Kelantan State Assembly actually voted for the hudud enactment.

"I would sleep more comfortably with Umno in power as it is a party I have known since the 1940s," he told a press conference at the end of his visit.

Anwar's jail sentence and whether he still had a future in politics dominated the discussions.

It was clear that the street demonstrations by Anwar and his supporters troubled him.

Mr Lee said he felt sorry for former prime minister Mahathir Mohamad for paying a "very heavy price" in the sacking of Anwar and the subsequent events.

One fellow journalist recalled that Mr Lee "almost fell out of his chair" when told that many Malaysians were unhappy with the outcome of the trial and the jail sentence.

"He questioned why young Malaysians should be unhappy when the entire procedure of the law had been properly carried out," said this journalist.

The world has changed. Singapore has changed and so has Malaysia. The days of a strong government in most democracies, governing with a sizeable majority, were also over.

Both Prime Minister Najib Razak and Prime Minister Lee Hsien Loong have to deal with a different generation of demanding citizens with little sense of their respective country's traumatic history.

Nor do they care about the early struggling years of nationhood. Instead, they expect their leaders to allow them greater democratic space, be more accountable and, at the same time, maintain a decent economic growth rate.

In the case of Malaysia, where the issues are more complex, material development alone may not be enough.

Malaysia and Singapore may be different entities, but we are mirror images of each other in many aspects, as Mr Lee repeatedly mentioned. And the man who looked into that mirror the most, has now passed on.