He scolds and bashes man for nothing 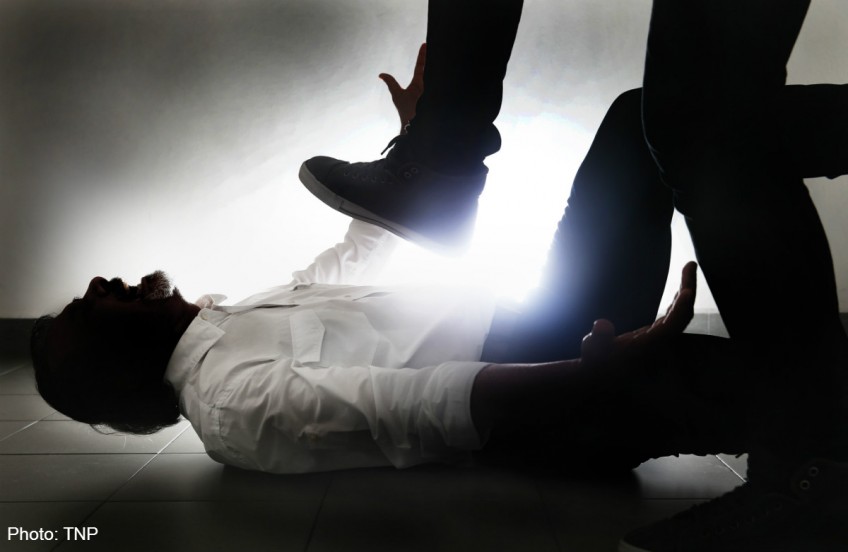 First, he scolded and attacked a fellow resident he had never spoken to before, leaving him with serious eye injuries.

Two days later, he threatened another man with a 15cm-long knife at a coffee shop.

Yesterday, Mohamed Firoz Sadar Ali, 49, was jailed 10 months for one count of voluntarily causing grievous hurt and another count of criminal intimidation.

Both incidents happened in November when Mohamed Firoz was a resident of the Angsana Home, a home for the poor run by the Thye Hua Kwan Moral Society, in the Buangkok area.

Mohamed Firoz approached Mr Neo and scolded him for no apparent reason, even though both men had never exchanged words before.

He continued to hit and kick Mr Neo, who grabbed onto his attacker while he was on the ground.

Mr Neo was taken to Khoo Teck Puat Hospital, where he was found to have suffered eye injuries and a fracture below his eye that required surgery.

Two days later, Mohamed Firoz turned up at a coffee shop at Hougang Street 51 at about 1pm and began shouting outside a stall.

One of the stall assistants, Mr Abdul Rahim Mohamed, recognised Mohamed Firoz as a regular patron of the coffee shop. He told him to leave and not create trouble.

Mr Abdul Rahim also told Mohamed Firoz that he would meet with him later.

About half an hour later, Mohamed Firoz walked up to Mr Abdul Rahim and pulled out a 15cm-long knife with a black handle.

He pointed the knife at Mr Abdul Rahim and shouted in Malay: "I will give you die today (sic)."

This was witnessed by another stall assistant, Mr Tan Eng Hoo, who quickly informed Mr Abdul Rahim's employer of what was happening.

The employer spoke to Mohamed Firoz and calmed him down before taking the knife away.

Mr Tan then placed the knife at his stall counter and left to attend to a customer. But when he returned to the stall, the knife was missing.

Fearing that Mohamed Firoz had taken it, he called the police.

Yesterday, Deputy Public Prosecutor Parvathi Menon pointed out that Mohamed Firoz had acted under no provocation in his first offence and had attacked a vulnerable part of Mr Neo's body.

Mohamed Firoz's lawyer, Mr Joseph Tan, said in mitigation that his client was drunk when he threatened Mr Abdul Rahim with a knife.

District Judge Christopher Goh noted the severity of the first victim's injuries and that both incidents happened within two days.

Judge Goh added that being drunk was no excuse for committing the second offence.

For voluntarily causing grievous hurt, Mohamed Firoz could have been jailed up to 10 years, fined and caned.

For criminal intimidation, he could have been jailed up to two years and fined.

This article was first published on Mar 20, 2015.
Get The New Paper for more stories.