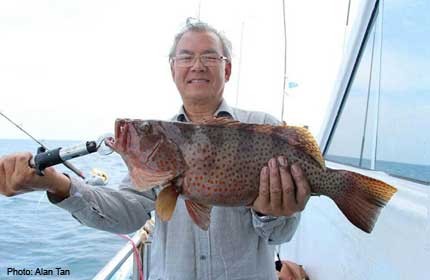 Mr Tan Boon Sin, a car workshop owner and fishing enthusiast, was found dead at his home at Hillside Drive on 10 July 2013.

Across the road, maintenance officer Fabian Patrick heard a shout followed by moans of agony. Mr Patrick, who works at a disused school across the street from 14J Hillside Drive, decided to check out what the commotion was.

What he saw shocked him.

From behind the fence of the former CHIJ St Joseph's Convent compound, the 54-year-old saw a man stagger out of the house and collapse face first.

"At first I thought he was wearing a red T-shirt, but then I saw something coming out from his neck, pooling around him," he said. "I realised he was wearing a white T-shirt and it was all red as the guy was bleeding."

Minutes later, he heard the roar of a car engine.

A silver Toyota Camry, parked nose-in within the compound, shot out and rolled over Mr Tan.

The driver of the car - which belonged to Mr Tan's father, 67-year-old Tan Boon Sin - then revved the engine, turned left and sped past the maintenance officer. The younger Mr Tan was pulled along, his legs apparently caught underneath.

"It was impossible to not see the body dragging," said Mr Patrick, shaking his head. "It was like the sound of tree branches dragging along the road. You don't want to hear that sound."

Mr Patrick gave chase on foot all the way to Upper Serangoon Road, where he stopped and called the police. He saw another eyewitness at a nearby mosque - who later identified himself as a part-time bodyguard - jump onto a motorcycle and pursue the car.

The police officer who arrived at the Tans' residence soon found the crime scene to be more deadly than anticipated.

"The officer went to the house with me and then he came out and said 'This is bad, there is another body inside'," said Mr Patrick.

The elder Mr Tan's body was found in the living room.

When The Straits Times visited the scene on Thursday, some neighbours recalled a commotion that happened on Wednesday afternoon.

"My maid heard a shout, a single cry, from a man at 3-plus in the afternoon," said a neighbour, who gave her name as Ms Neo.

The helper from the home next door also told her maid that she heard the banging of tables at about that time, said the 42-year- old accountant.

There is a chance that closed- circuit television cameras could have captured the crime.

There are two CCTV cameras at the side of the Tans' residence, while directly across the road, there are two more installed in a neighbour's home.

These may have captured the suspect entering and leaving Hillside Drive.

Police yesterday said that they did not believe the murders were random and that the public should not worry about safety.