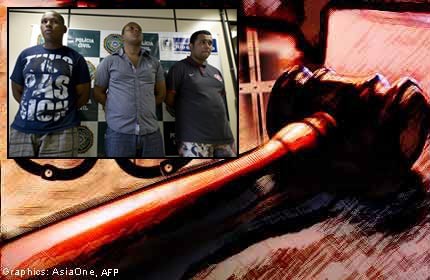 The attack occurred in a minibus in March, shocking the nation and it came as Rio sought to shake off a reputation for violent crime, with a succession of police operations in drug-infested slums ahead of World Cup 2014.

The couple had boarded the minibus at around midnight in Copacabana and were headed to Lapa, a trendy area home to popular bars and dance clubs, when the six-hour ordeal unfolded.

Two men who boarded the bus at the same time ordered the rest of the passengers to get off and they then handcuffed the eventual victims, beating the Frenchman with a metal bar and raping the 21-year-old American as they drove around the city, according to police.

The driver of the vehicle, 20-year-old Jonathan de Souza, and Walace de Souza Silva, 21, each received a jail term of 49 years and three months for robbery, rape, extortion and corruption of minors.

Under Brazilian law, they will serve a maximum of 30 years.

Another defendant, 21-year-old Carlos Armando Costa dos Santos, who was not present at the start of the assault, was sentenced to 21 years for rape and extortion.

A youth implicated in the incident is to be tried later by a court for minors, the daily O Globo reported.

The assailants also took a credit card from the couple and used it to withdraw cash and buy gasoline and food. They were arrested a few days later.

In his ruling, judge Guilherme Schilling Pollo said the young American woman "had been humiliated in a cowardly manner and the brutal act of her assailants had caused disgust and indignation".