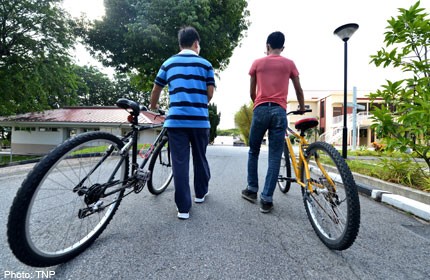 SINGAPORE - When he arrived at Boys' Town, life was bleak and the future dim. Now he is 19 and life has turned into one of promise.

Alan (not his real name) has qualified for a polytechnic.

Boys' Town, which turned 65 last Friday, reaches out to young people from socially and economically disadvantaged backgrounds to equip them with the skills they need to become responsible and contributing members of society.

It launched new programmes and improved facilities last Friday, including a 10-bed shelter for boys aged between nine and 15 to provide those who have suffered multiple traumas with a safe environment.

There is also a new 10-bed hostel for older youth who have no family or other forms of support, and require a place to stay while they complete their National Service or studies.

These new facilities, on top of the existing facilities and programmes, will go a long way, especially for people who had a rough start like Alan.

He ended up at Boys' Town because his mum died and his dad abandoned him.

His grandmother took over but she, too, died when he was 13.

His uncle took over but could not control the by-then difficult teen. So he sent Alan to Boys Town.

And Alan is glad he did because he found new meaning in life, thanks to the "nagging" and "lectures" by his supervisor and the social workers, he said with a cheeky smile.

Alan eventually found himself scoring 18 points for his O levels - something he had never dreamt he could do.

Thanks to an aunt living overseas who pays for his education, Alan now studies electronic and computer engineering at a local polytechnic. And he aspires to become a programmer at IBM one day.

"It (is all) thanks to my social worker and supervisor. They kept lecturing me, nagging me, which is what Boys' Town is about. They keep pushing you," he said.