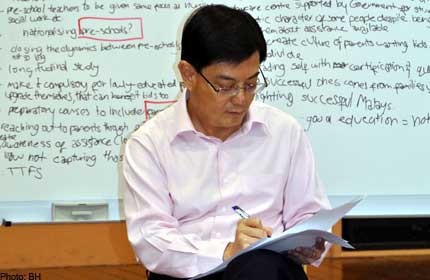 'JOBS I'VE NOT HEARD OF'

He recalls sessions where he asked students what they want to be when they grow up. Their answers involve "terms which I am completely unfamiliar with", he said.

They want to be sound artists, fashion photographers and animation character developers - a wide range of jobs reflecting the evolving nature of the Singapore economy and the exposure children now get, he said.

But while he feels cheered by the different pathways and passions on display, it worries him. "Unless we are able to create opportunities, many of our young people are going to be disappointed," he added.

This is not a challenge the Education Ministry can meet on its own, but will require a whole-of-government approach to building an economy that can accommodate the aspirations of the workforce of the future.

THE OSC dialogues often reveal to Mr Heng gaps between what the Government thinks it is doing and what people perceive it to be doing.

In the education dialogues, he was struck by the wide gap between what schools think they are doing - to develop every child to the best of his ability - and what parents perceive to be going on in schools.

"Unless we bridge that gap, we will always have a problem in terms of how parents perceive education," he said. "And that's why we decided to expand quite significantly the engagement of parents."

Such a perception gap has been written about in Europe and the United States. It is known as the "40-year gap" because parents with children in primary school attended primary school 40 years ago.

"At the same time, our educators are trying to see how we can prepare the Primary 1 child for life, 40 years hence. So you actually have two 40-year gaps to cross," he said.