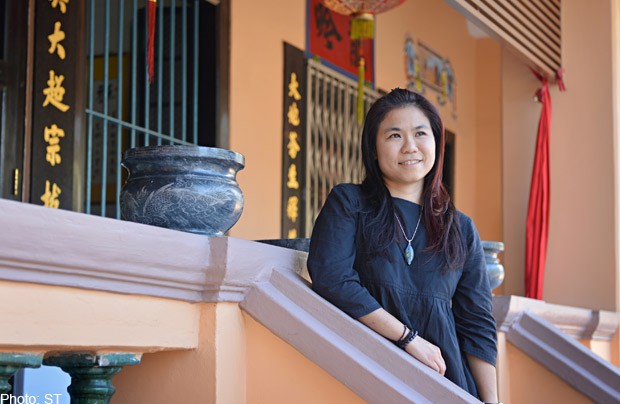 Call it an epiphany. Dr Chua Ai Lin, a young research officer with the National Archives fresh out of university, was outside her office in Hill Street one day.

She had been feeling inadequate in her job in the Oral History Centre, given that her schooling at Oxford University was on medieval European history. But suddenly, as she took in her surroundings, "I thought, wow, I can feel the history emanating from the landscape, because I knew what was there before.

There was this moment of deep connection", recalled Dr Chua, 39.

Singapore Heritage Society (SHS) tours and activities that she had taken part in had opened her eyes to her own culture. Last week, seemingly completing the circle, she became the youngest president in the society's 27-year history.

Without such heritage tours, she would never have known of the existence of Sian Teck Tng Vegetarian Convent in Orchard, where she chose to do her photography shoot for this interview.

The convent in Cuppage Road was established in 1883 for widows and orphans.

She agrees that heritage has become a hot topic these days, what with the community increasingly driving campaigns to save sites, and enthusiasts rushing to document fast-disappearing landscapes and traditions through photos, films and blogs.

"I think the pace of change has gotten to a tipping point where people can feel it more easily," said the academic, who quit her National Archives job to pursue a master's degree in Singapore history at the National University of Singapore (NUS). Her PhD dissertation at Cambridge University was on popular culture and modernity in 1920s and 1930s Singapore. She now teaches at NUS.

"Even my 20-year-old students say they feel disoriented by the changing landscape.

he places they grew up with - the playgrounds and schools - are no longer there." But the idea is not just to ruminate over what you have lost from your childhood, but to capture the richness of Singapore's longer history in the national consciousness. "We have so many rich layers that go back not just to the 19th century. We have 14th century history in Singapore.

Our history is not just, 'I remember growing up playing in these dragon playgrounds', but that our landscape and our society have all those layers and depth to it."

To that end, Singapore needs to build a repository of data - in-depth, long-term research and analyses of the island's history that will leave a legacy for the future.

The 200-strong society has been trying to do that with the research papers and books it publishes; its niche is in providing intellectual discourse and expertise. Indeed, among its alumni are some of Singapore's top brains like historian Kwa Chong Guan, sociologist Kwok Kian Woon and architect William Lim.

As its new president, Dr Chua hopes to provide a platform for heritage lovers to interact given the growing interest. But the society's advocacy role remains one of its cornerstones - it had, over the years, fought battles with the authorities over Chinatown and the National Library, among others.

Most recently, it and other members of civil society locked horns with the Government over its decision to sacrifice a part of Bukit Brown cemetery to build roads.

Eventually, the authorities relented by giving up part of its road plans and building a bridge instead. "SHS was set up to provide that voice. We're not just a social club for people who like to listen to talks," said Dr Chua of the lobbying.

The political climate has changed, she noted. "We've had lots of meetings with government agencies. Sometimes, meetings that are briefings rather than discussions.

But this would not have happened before." She hopes to find a way to document the rest of Bukit Brown; one other new project under her watch will be a roundtable forum for Kreta Ayer that brings together residents, businesses and clan associations to discuss what they want in their community.

To those who view the society as a pesky bunch of nostalgia lovers who constantly stand in the way of redevelopment and progress, she said: "It's not a dichotomy between development and modernity, but how can we take that awareness and appreciation of what we have, build on it and move forward?"

There needs to be a sense of continuity, or at least an acknowledgement of what was there before, she argued. "When it's something of significance, let's just remember to give pause and fully consider all the options before we do something that is irreversible."