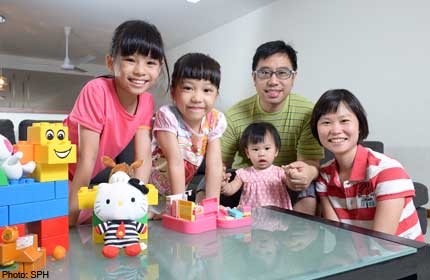 SINGAPORE - The most senior female officer in the Singapore Armed Forces is Colonel Gan Siow Huang, who was among the first four women to receive the SAF merit scholarship in 1993.

After graduating from the London School of Economics, she rose through the ranks and is now head of the SAF's joint manpower department. She is also something of a poster girl for the SAF's recruitment campaign for women.

But the 39-year-old is also a proud mother of three girls: Ella, nine; Emma, five; and Eleanor, one. Despite her current 8am-to-7pm work routine, Col Gan still manages to spend at least three hours with her daughters in their Bukit Panjang home.

"It is always a joy to be there to witness every step of their growing-up years," said Col Gan, who is married to Mr Lee Jek Suen.

It was through the military that they met in 1994. He was a naval officer studying in Britain on an SAF scholarship. They got married in 1998.

Mr Lee, who left the service in 2006 for the private sector, said in jest: "At least she was holding a stable job, allowing me to be more adventurous with my job options."

Col Gan said her second pregnancy was her "most trying" because her husband was away in Algeria. After that, the family decided to settle down, with Mr Lee taking twice-monthly work trips to Shanghai.

Col Gan, who also has a Master of Business Administration from Massachusetts Institute of Technology, admitted that as a pioneer female scholarship recipient, she does face some pressure to meet people's expectations.

Many others have followed in her footsteps, with one becoming the first woman to be awarded the most prestigious SAF Overseas Scholarship in 2010.

Col Gan said: "It keeps me going, knowing that I'm not alone and I cannot let down some of the very good men and women I've worked with over the years. I'm still happy to know that I'm doing something that is more than just desk-bound and money-making."