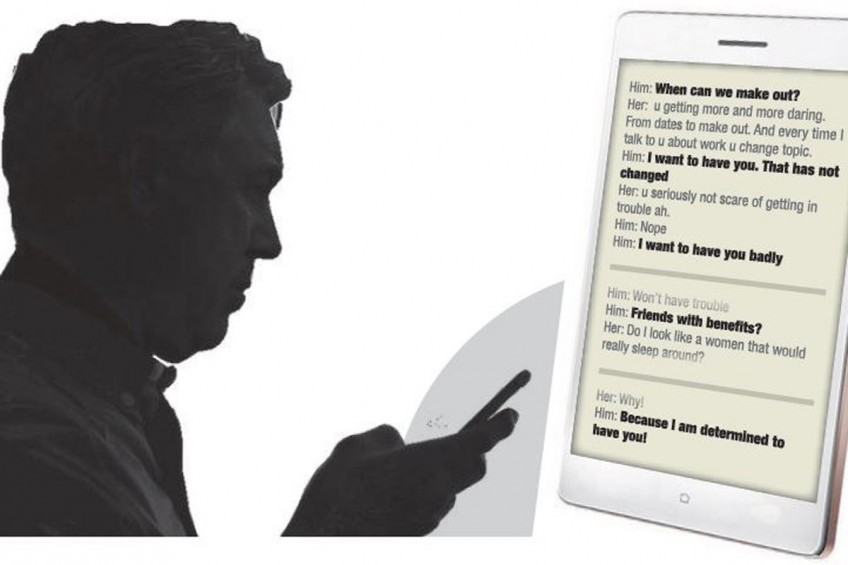 It started out as an innocent conversation about work.

But the more they communicated over WhatsApp, the more daring the high-ranking civil servant allegedly became.

First, the married man allegedly asked her out on a date, then to be his lover. Or as he called it, "friends with benefits".

Fed up with his advances, she made a police report. The police are now investigating the matter involving a Lieutenant-Colonel in the Singapore Civil Defence Force (SCDF).

The married father allegedly hit on the woman, who was working for an events management firm that had won a tender for an exhibition he was overseeing. The New Paper understands that she joined the firm after it won the tender.

The 28-year-old woman, whom we shall call Pamela, met TNP last week to give her side of the story.

She said she had since resigned from the company because she felt it had not supported her sufficiently when she had complained about the alleged harassment.

Showing TNP her police report, she claimed that after she repeatedly turned down the officer's advances, he allegedly made her life difficult by bad-mouthing her to her former employer.

Pamela said she had joined the firm in May, shortly after it was awarded the tender to organise an exhibition that cost over $1 million.

She met the officer after she was assigned to help with the exhibition's events and programming.

Her first impression was that he was helpful and professional, though occasionally cocky, she said.

She showed TNP the transcript (at right) of their alleged WhatsApp conversation between Aug 5 and Sept 3.

She said: "It was a work-centred conversation at first. I asked him for directions to the Immigrations Checkpoint Authority because we were doing a video production recce there and he helped me."

Over the next few weeks, he asked her personal questions, such as her qualifications and family background, before allegedly saying on Aug 21 that he wished to date her.

Pamela, who has been working in the industry for nine years, claimed she was not surprised at first.

She said: "In our industry, a date usually refers to a networking session where I take my colleagues and he takes his. But from his repeated attempts to ask me out one-on-one, it became quite clear he was looking for something more."

Pamela claimed she tried to avoid his advances each time, but he persisted. For example, she would change the topic and talk about work, or ignore his messages when he allegedly asked her to be his lover.

She said she knew he was married.

He allegedly grew more daring and asked for sexual favours, such as them "making out".

She said: "I felt very offended. He even texted me 'you are hot' during a meeting, moments before I was about to do a presentation."

When asked why she did not reject his advances outright, she said: "I was in a very difficult position. I had to maintain a positive relationship and not burn bridges because we were still working together."

After spurning him several times, she thought he had got the hint.

But he then made her life difficult, she alleged. "He told my boss he did not understand my part because I was not comprehensive in my work. But how could that be when everyone else on the team understood?

"He also told others that I was the one who kept pestering him and that I was irritating."

Pamela claimed that when she told her superiors about the incident, they dismissed her claims and told her to carry on with her work. She said one of them even suggested that she go out with the officer.

They also tried to persuade her not to report the matter before the project was completed.

"They asked me to hold off until they got the signature for the quotation. That was why I left. The firm was not taking care of my welfare," said Pamela.

She quit in early September and recounted her experience to TNP earlier this month in the hope that his actions would be brought to light.

"Who knows which other girl he'll prey on next. I hope it stops with me," she said.

TNP approached the firm's assistant general manager (AGM) and told her about Pamela's allegations about the firm. The AGM said she had offered Pamela professional advice, such as to ignore the officer, and added that she could not comment further as it was a personal matter between the two parties.

When TNP contacted the SCDF officer over the phone last week, he hung up when he realised it was a reporter on the line.

A police spokesman confirmed that a report had been made and said investigations are ongoing.

An SCDF spokesman told TNP that it expects its officers to uphold exemplary standards of discipline and personal conduct.

He said: "We take a serious view of any alleged misconduct on the part of our officers. We are unable to comment further as the case is currently being investigated by the police."

This article was first published on October 17, 2015.
Get The New Paper for more stories.