To his Chinese tutor, he was a 'gentle lion' 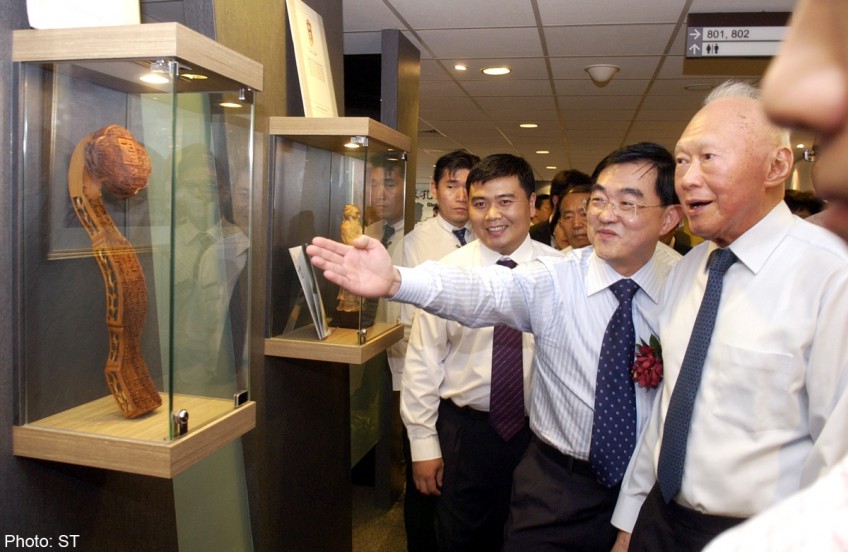 JULY 14, 2007: Dr Koh showing Mr Lee a wooden sculpture during the official opening of the Confucius Institute at the NTU@one-north campus. Next to Dr Koh is Mr Kong Fan Biao, the craftsman from China who carved the sculpture.

Koh Hock Kiat, 54, is the former director of the Confucius Institute at the Nanyang Technological University.

It was a rainy day in 2006. Even though I was well-prepared, I was slightly nervous as I stepped into the Istana to make my way to his office, where the lesson was to be held.

Mr Lee, after all, was Singapore's founding father. Many viewed him as a stern man, not to be crossed, a "shi zi" (lion), as some would say in Chinese.

My nervousness was very quickly dispelled. As a student, he was humble and easy-going. He never hesitated to ask questions, and these were not just about Chinese language and culture.

He wanted to know too what I thought about issues like China and its rapid rise.

He also never stood on ceremony. Once, we did a lesson at the Singapore General Hospital because he was hospitalised there. He was in good spirits and appeared in a shirt and shorts.

I always began lessons by asking him how he was. This lightened the mood and was a good way for him to warm up before we moved on to converse about other topics.

Often, the topics were related to current affairs. We would read news articles or commentaries in Lianhe Zaobao or in newspapers from China and Taiwan, and then discuss them.

We stopped from time to time if he needed to clarify the meaning of a word or a term, or if there was a pronunciation that he had to go over a few more times.

But otherwise, we let the conversation flow freely to mimic as far as possible a natural conversation he might hold with his Chinese- speaking guests.

I enjoyed these conversations immensely as they often provided a glimpse of a side to Mr Lee that I would come to admire very much.

His sentimentality was quite evident, for example, when he recalled, with much nostalgia, his friendship with Chiang Ching-kuo. He would talk about the two stone lions he had received as a gift from the late Taiwanese leader and remind us of how Chiang had generously acceded to a request to allow the Singapore Armed Forces to train in Taiwan.

He also treasured memories of his days in Britain. When I e-mailed him one year to wish him well on his birthday, he replied in a long e-mail that he was dining in a restaurant in London.

It was a restaurant he had been to as a student and which he liked a lot. It had not changed at all, he wrote with much delight. With age, Mr Lee spoke more slowly and softly than he used to.

But whenever he began talking about an issue related to Singapore's survival or well-being, he would become excited, his tone moving up a notch.

Discussing Singapore transformed him into a young man, I remember thinking to myself.

Mr Lee's interest in the Chinese language is well-documented. It dates back to the 1950s, shortly after he entered politics.

In his later years, however, he showed a desire to learn more, not just of the language - for conversational and speech-making purposes - but of Chinese culture as well.

He wanted to talk about Chinese geography and the cultural significance of various sayings and art forms.

I have always believed in an approach to learning Chinese that balances linguistic skills with cultural knowledge.

For me, this shift he made in his later years was evidence that he had matured in his journey as a student of Chinese.

When Mrs Lee passed away in 2010, our Chinese lessons were put on hold. It would have been understandable if Mr Lee had decided then to permanently set aside the classes. But remarkably, within a month, he chose to resume lessons, and at a normal frequency, no less.

Even in the later years, when his health did not permit for lessons to be held as frequently, he never completely gave them up. Sometimes, when he got tired, he would ask to rest for 30 minutes before resuming the lesson.

There was a determination and a fighting spirit in him that I saw, not just in the learning of Chinese, but in other areas of his life - such as in his refusal to allow his security officers to aid him in walking.

But above all, I remember Mr Lee most fondly for the kindness he never failed to show to the people around him.

Often, he would also return from his overseas trips with gifts for us. When the Chinese leader Hu Jintao gave him some pu'er tea, he gave it all to us - after asking us to explain the significance of the tea - along with a teapot, which was a gift from another official.

And so, even though for many Singaporeans the thought of Mr Lee will continue to bring to mind images of a forbidding lion, for those who had the privilege of interacting with him at close quarters, he was a gentle and compassionate lion.