His small intestine was sticking out 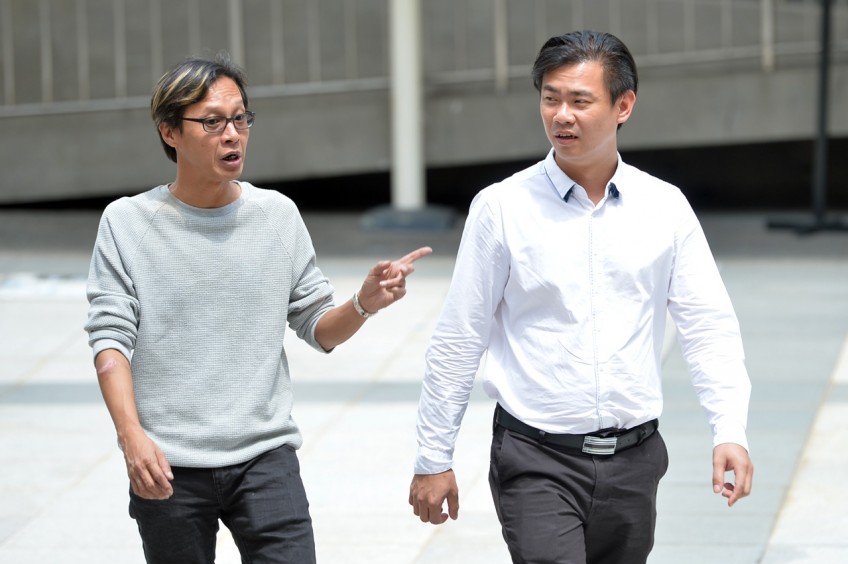 Then, armed with a Japanese samurai sword, Koh stabbed the manager.

By the time he was done, Mr Chiar Kok Soon's small intestine was sticking out of his stomach.

It took Mr Chiar a month to heal, but up to today, he still feels pain when he exerts himself.

Mr Chiar was at the State Courts yesterday to testify against his 51-year-old assailant, who is on trial for voluntarily causing grievous hurt to him. Koh had been jailed 45 months in March for 13 other offences.

Mr Chiar, 36, told the court he suffered two slash wounds on his left forearm during the attack.

He was rushed to the operating theatre half an hour after seeing a doctor at the hospital and was given 21 days' medical leave.

Koh told authorities she had complained to him about being mistreated by some customers, who had smashed cake on her face.

He also claimed that her manager, Mr Chiar, had bullied her.

On Nov 28 last year, Koh went to the pub with a large box containing the 57cm sword with a 35cm blade.

A staff member spotted Koh with the box and informed Mr Chiar as well as the manager of the head office that owned the pub, Mr Chee Mun Leong, 49.

Mr Chee went up to Koh and served him dinner to appease him.

When Koh finished eating, he opened the box, took out the sword and tied it to his hand using a piece of nylon string.

He then told Mr Chee in Hokkien: "Walk off, if not, I will slash you."

Closed-circuit television (CCTV) footage of the stabbing was shown in court yesterday.

Koh was seen, with the sword drawn, entering the room where Mr Chiar was seated. He approached Mr Chiar, who tried to shield himself using his hands as well as a table.

A scuffle followed and Koh stabbed Mr Chiar once with the sword.

The confrontation lasted about 20 seconds, then Koh walked off with the bloodied sword.

Yesterday, Mr Chiar rolled up his sleeves to reveal two scars on his left forearm. One of the scars appeared over at least half of his inner forearm.

He told the court that he suffered the injuries when he used his left arm to defend himself against Koh.

He said he returned to work after his medical leave ended on Dec 18.

Dr Loong Tse Han, who attended to Mr Chiar when he was taken to Tan Tock Seng Hospital, also took the stand yesterday.

He said Mr Chiar had required immediate surgery then, even though he had appeared alert and his vitals were normal.

This was because Mr Chiar's small intestine was sticking out of his body and could dry up, become damaged or become infected, which could cause death.

Dr Loong also noted that the wounds on Mr Chiar's arms were caused by a sharp object, even though he could not ascertain if they were caused by the sword, which was shown to him.

When Mr Palaniappan asked in cross-examination whether Mr Chiar's condition was life-threatening at that point, Dr Loong replied that such cases always constituted a life-threatening situation and required immediate surgery.

Koh also testified yesterday. He claimed that he only stabbed Mr Chiar only once, but did not slash his arms.

The case has been adjourned to later this month for both sides to make their submissions.

This article was first published on May 7, 2016.
Get The New Paper for more stories.