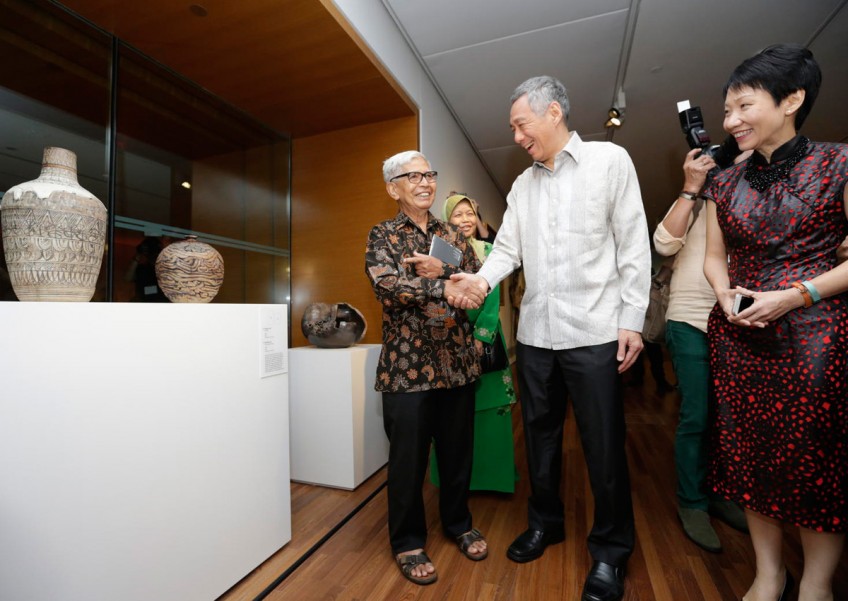 The reincarnation of the historic Supreme Court and City Hall buildings as Singapore's premier museum - the National Gallery - was a journey with twists and turns.

Before the museum got the nod, the Government had seriously considered putting the buildings to commercial use, such as by turning them into a heritage hotel, like the Fullerton Hotel by the Singapore River.

Alternatively, it thought of leaving these national monuments as places "for people to walk through'', when no government agency wanted to occupy them after they were refurbished 10 years ago. This view into what the 64,000 sq m space could have been was revealed by Prime Minister Lee Hsien Loong yesterday when he opened the fortnight-long celebrations of what promises to be a main attraction for Singaporeans as well as visitors.

The National Gallery, with two permanent galleries, will house what is said to be the world's largest collection of South-east Asian art.

Costing $532 million, it will also have, among other things, an education facility and workshop facilities to support school visits.

Ten years went into its making and Mr Lee gave credit to two men who envisioned it. They are Dr Lee Boon Yang, who was the minister in charge of the arts from 2003 to 2009, and his deputy, the late Dr Balaji Sadasivan, who was senior minister of state.

"From a practical point of view, it might have been cheaper and easier to build a new museum on a greenfield site, rather than renovate these old buildings to a new purpose," PM Lee said.

But Dr Lee lobbied hard against considerable scepticism from his fellow ministers, while Dr Balaji was instrumental in overseeing the gallery's implementation in the initial stages, the PM added.

The result is "an understated but high-quality museum, in keeping with the ethos of our society", he said as he praised lead architect Jean Francois Milou for thoughtfully keeping the buildings' structure while injecting them with new life.

PM Lee noted that Dr Lee, as chairman of Keppel Corporation, continues to support the arts, with the company donating $12 million for the Keppel Centre for Art Education. Dr Lee is also chairman of Singapore Press Holdings.

Arts and culture are integral to great cities such as New York, Paris, London and Shanghai, the PM said.

While the National Gallery is "nowhere near the scale and riches" of the Louvre in Paris or the Metropolitan Museum of Art in New York, he said: "We've got a beautiful building to house the art in, which all of us can access and enjoy. When you walk through the galleries, you can't help but feel a sense of history."

The Supreme Court and City Hall buildings witnessed defining moments in Singapore's history, such as the surrender of Japanese forces in South-east Asia during World War II, and founding Prime Minister Lee Kuan Yew addressing a massive rally from the City Hall steps in June 1959 when Singapore attained self-government.

The gallery will be for everyone - be they art aficionados, families or children, Mr Lee said.

"The measure of success is not how many tourists come, or how our museum ranks internationally, but whether Singaporeans feel the Gallery belongs to them, visit it to enjoy what it offers, and in time come to love the Gallery," he said.

This article was first published on November 24, 2015.
Get a copy of The Straits Times or go to straitstimes.com for more stories.