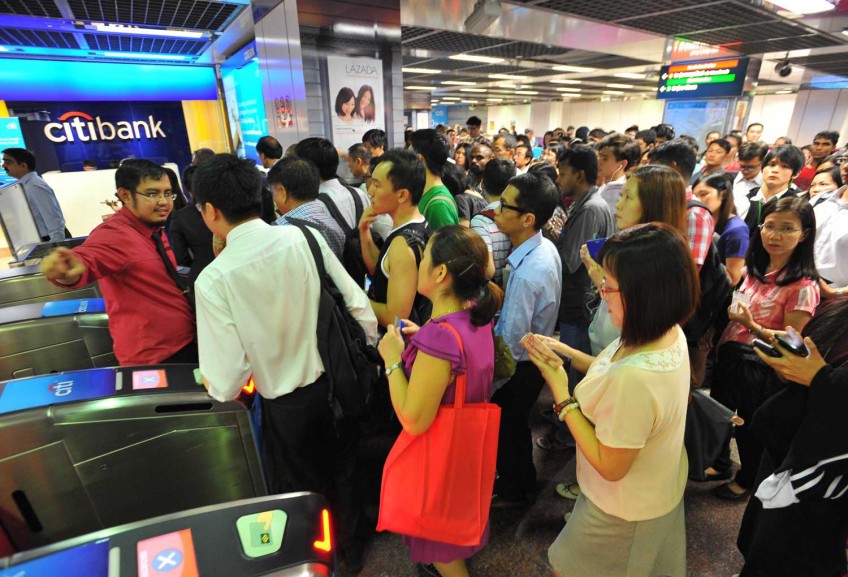 Crowds at City Hall MRT station being directed away from the fare gates leading to the trains. A power trip, which could have been caused by a faulty train, crippled services throughout the North-South and East-West lines for more than two hours from around 7pm on 7 July 2015.
The Straits Times

MTR, Hong Kong's rapid transit railway system, said it will question China's CSR Qingdao Sifang company about the quality of the 102 trains being manufactured for its use following revelation that Singapore's SMRT had shipped 26 faulty subway trains back to the train maker for repairs.

MTR's contracts with CSR include nine eight-car trains bought in March 2012 at a price of HK$1.74 billion (S$303.3 million), which are to serve the high-speed rail linking Hong Kong and Guangzhou after their delivery in September, reported Hong Kong news agency FactWire.

The other 93 eight-car trains, procured in July last year, are to make up 70 per cent of the MTR trains that ply Hong Kong's urban lines.

These cost HK$8 billion and are slated to be delivered in stages starting in 2018.

"On the alleged technical issues of trains in Singapore, the MTR Corporation will approach CRRC Corporation to seek further information," the MTR said in a statement on Tuesday night.

It pointed out that CRRC used a stainless steel material to make the bodies of its 93 urban trains, instead of the aluminium alloy used for the Singapore trains.

As for the high-speed trains, the aluminium material used was imported from a Japanese supplier.

The corporation also swore that the new trains had to pass all necessary safety and performance tests and obtain approval from local authorities before they enter passenger service.

Sources from China told FactWire that some of the CSR-made trains used in Singapore had aluminium impurities in their bodies, which could be what caused the cracks found on the sub-floor and bolster function parts connecting them to the bogies.

Cracks in a train bolster would over time cause the bogie, which is the undercarriage on wheels, to detach from the train body, causing the collapse of an entire train, Lo Kok Keung, a retired engineering lecturer, told Radio Free Asia-Hong Kong.

Soon after they began service in 2013, design faults popped up in Singapore's CSR-made trains, including the shattering of glass at the side of passenger seats and the explosion of a Chinese-made uninterruptible power supply battery during repair.

Then, most alarmingly, cracks were found on the structures linked to the bogies.

Singapore's Transport Ministry has confirmed the defects but said these were not serious.

It added that the repairs carried out in China since last month should end by 2019.