Hollande seeks to boost ties with Asia in face of 'isolationism' 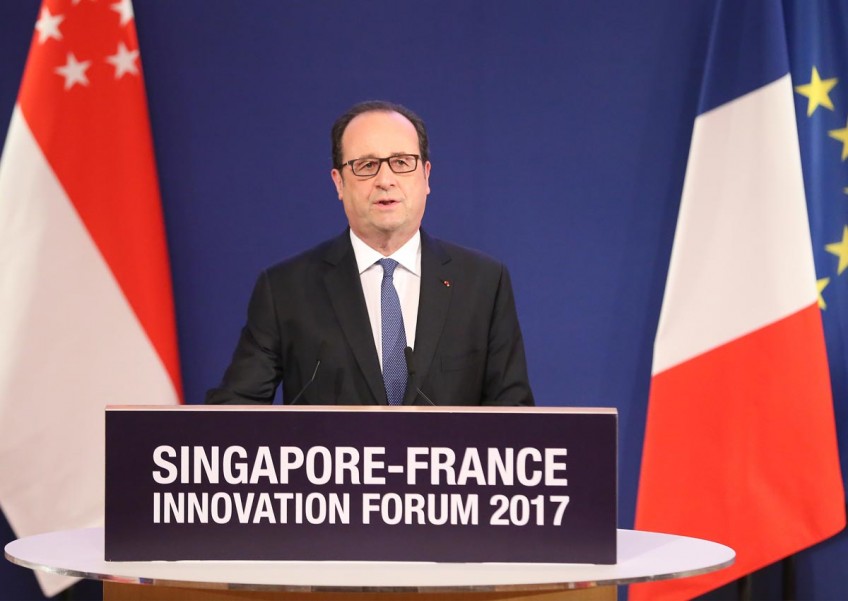 Singapore - French President Francois Hollande called Sunday for efforts to intensify the relationship between Europe and Asia in the face of resurgent "isolationism".

He was speaking in Singapore, the first stage of the last international tour of his five-year term which will also take him to Malaysia and Indonesia.

"I appeal for us to intensify our exchanges, our trade, political and cultural agreements," he said.

"This is all the more necessary because there is a resurgence of protectionism, isolationism and the questioning of... international institutions," he said in a clear allusion to the United States under President Donald Trump.

Europe, Hollande said, must tell Asia that "we have much to do together, much to defend and much to promote".

France and Asia, he insisted, share "the same concept of independence and security".

Hollande cited the "very high level" of military co-operation between Paris and Singapore, such as the training of Singaporean fighter pilots in France and joint work on cyber-security.

He was speaking at the Asia-Pacific campus in Singapore of France's ESSEC business school after meeting French students, teachers and business leaders during a visit focused largely on economic issues.

On Monday he will open a forum grouping 170 French start-ups which have a presence in Singapore and make a speech on the regional and international situation to the prestigious Singapore Conference.

On Tuesday he travels to Malaysia, which has a continuing relationship with France in defence matters.

Hollande's tour ends Wednesday in Indonesia, where he will make the first visit by a French head of state since Francois Mitterrand in 1986.

Barring any surprise developments the French president has only one other major commitment abroad before his term ends in mid-May: the post-Brexit European summit on April 29 in Brussels.