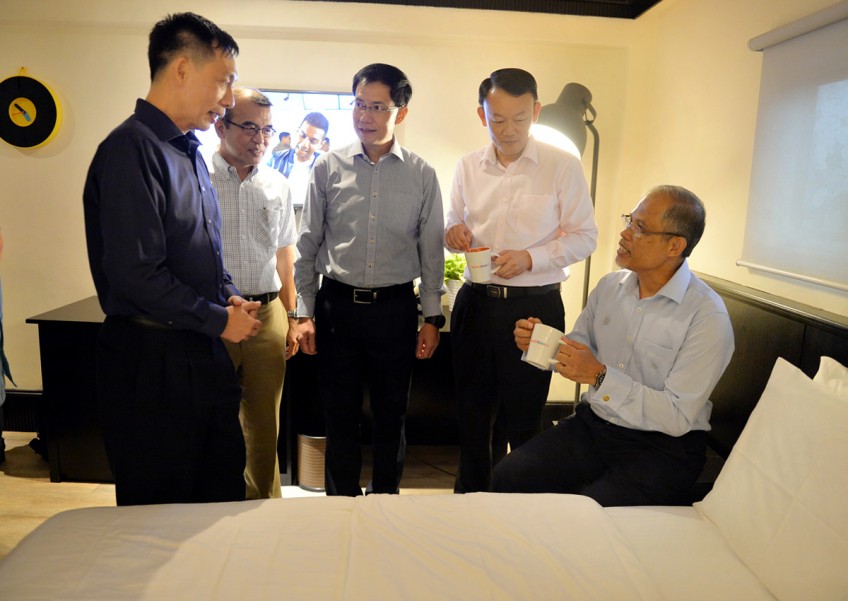 Home Team national servicemen asked for more family-oriented recreational facilities at their clubhouses and they got just that in the newly refurbished HomeTeamNS Sembawang Clubhouse.

One food outlet, Makan Bagus, which serves local seafood dishes, is in the process of being halal-certified. The other, 301 Bar & Kitchen, is a Western-style bistro that is run by local celebrity Pierre Png.

The Sembawang clubhouse opened in 2000. It also features 25 newly renovated guest rooms designed to accommodate both small and big families, as well as couples and groups of friends.

Family rooms have a mix of single and queen-sized beds in the same room, while those designed for groups of friends come with bunk beds. Room rates range from $95 to $150 a night depending on the room type and booking period.

The refurbishment cost $4 million and took six months to finish.

The facilities were launched yesterday by Mr Masagos Zulkifli, Minister in the Prime Minister's Office, Second Minister for Home Affairs and Foreign Affairs, and president of HomeTeamNS.

He said that the refurbishment and new facilities resulted from a survey done among Home Team national servicemen in 2008.

"We asked them what they wanted, and the overwhelming response was that they wanted a clubhouse to call their own, a place where they can come together to meet other members as well as to bring their families along," Mr Masagos said.

The newly refurbished clubhouse has already received a positive response. Said Mr Masagos: "The guest rooms are already fully booked on weekends. It's very hard to get a room at this place now; at one time, the occupancy rate was hardly 30 per cent."

They are part of a new phase of initiatives totalling $1.1 million, which include the construction of attractions such as an indoor playground called T-Play and a theme park featuring climbing challenges called Clip 'N Climb. T-Play will be built at the Bukit Batok clubhouse, while Clip 'N Climb will be located at the Tampines clubhouse.

Ms Agnes Eu, chief executive of HomeTeamNS, said that the organisation will continue to seek feedback to improve its clubhouses.

"We want everyone to view our clubhouses as their natural choice when they want to go for some recreation," she said.

"We will be providing a lot for families, and want to do a lot more for the younger guys in their 20s and 30s, who will be looking for different kinds of facilities compared with the family man. We want to find ways to satisfy as many people as possible."

This article was first published on September 22, 2015.
Get a copy of The Straits Times or go to straitstimes.com for more stories.