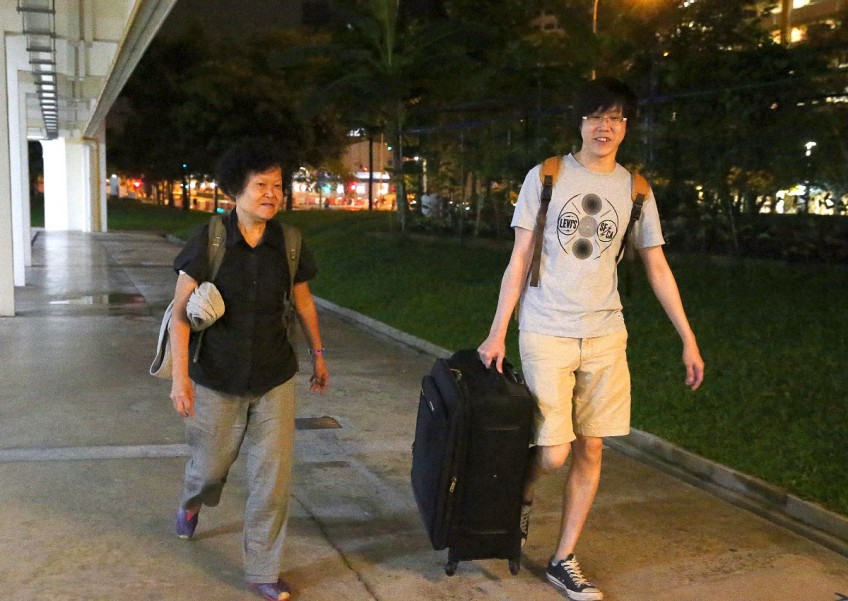 REUNITED: Ms Mary Seow and her son, Mr Edward Goh, back together in Singapore, where they are hoping to start anew.
The New Paper

Thanks to readers of The New Paper, Singaporean Mary Seow was able to leave her harsh life in Hong Kong and return to Singapore with her son.

Arriving yesterday evening on a Jetstar Asia flight, with tickets sponsored by the airline, the 60-year-old smiled shyly as she emerged from the luggage collection area at Changi Airport's Terminal 1.

With her was her only son, Mr Edward Goh, 28, who flew to Hong Kong on Friday morning for a surprise visit, with the help of several kind TNP readers.

Last weekend, TNP first reported about Ms Seow's plight of living in Hong Kong as a McRefugee - a term used to describe a homeless individual seeking overnight shelter at a 24-hour McDonald's outlet.

She eked out a living on the streets, earning just 200 yuan ($44) a trip as an illegal "parallel trader", carrying goods such as diapers, milk powder and other branded items across the border to the mainland.

She told TNP yesterday that there were times she would go hungry for three to four days.

Before arriving in Hong Kong in August, she had spent several years away from her family in China, where she last worked as a street sweeper.

Her family here was shocked to discover her life as described in the paper last week.

Mr Goh had filed a missing person's report almost five years ago when Ms Seow, a single parent, became uncontactable after abruptly selling the flat she had shared with him here and leaving for China.

TNP first linked up mother and son via a video call on Tuesday.

An outpouring of support from readers meant that Mr Goh, who earns $2,000 a month, could fly to Hong Kong. A Singaporean working and living there picked him up from the airport and paid for lodging.

TNP also found a way to get him to meet his mother.

Eventually, Mr Goh was able to convince Ms Seow to return to Singapore.

Ms Seow said her son told her: "Mummy, as long as you find happiness, it's okay to me.

"What has happened, don't think about it. We start anew."

Waiting at the airport yesterday to greet the duo were Ms Seow's uncle, Mr Roland Seow, 59, and his wife, Madam Phyllis Ho, 56, both property agents.

Mr Seow had reached out to TNP for help after reading the first article on his niece.

With wide smiles, they greeted each other with firm handshakes.

Mr Seow said he had lost hope of ever seeing her again and his heart felt heavy when he found out about her situation in Hong Kong and the risks she took.

Last night, Mr Goh brought his mother back to the HDB flat where he rents a room.

He had cleaned up the place and found an extra bed before leaving for Hong Kong, in the hope that she would return with him, he said.

He beamed widely as he helped his mother with her luggage.

Ms Seow said: "I have been away for so long. I missed my son the most."

She said she had been too ashamed to return home after having sold the flat that should have been her son's home and losing her money in China.

Had she known that her son would visit, she would have disappeared to avoid him out of embarrassment and guilt.

But after meeting her son, and with much persuasion by her son and uncle, she relented and agreed to return home with him.

She said simply: "Because he came looking for me, I feel better."

The future is uncertain for the duo as they have to try to sort out their living arrangements here.

The ever filial Mr Goh last night fretted about his mum not having her own pillow, saying: "She can use mine first."

This article was first published on Nov 22, 2015.
Get The New Paper for more stories.