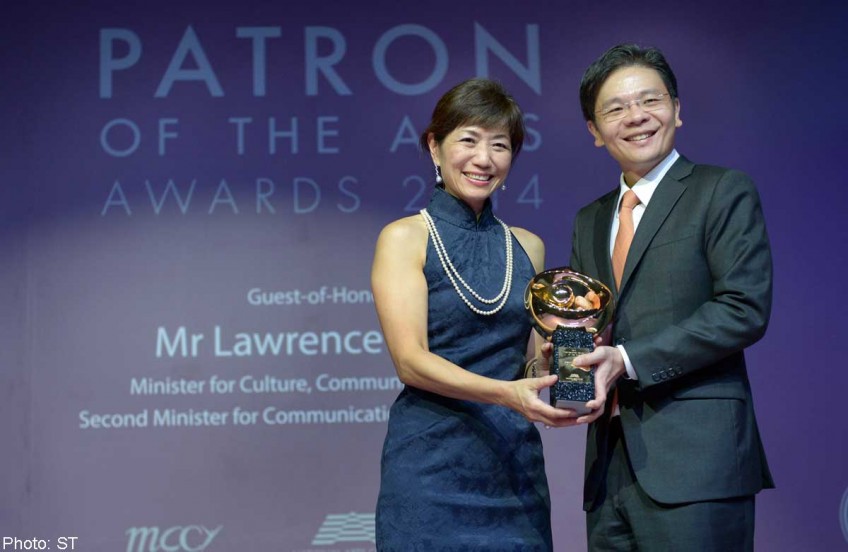 You do not need to be a big corporation or have deep pockets to give to the arts - as seen at the annual Patron of the Arts awards last night. Over 340 heritage champions were recognised for their donations that have helped shape Singapore's arts landscape.

Among them was Poh Tiong Choon Logistics, which received the Patron of the Arts award for the third time, for cash donations to around 30 arts productions. Its total donations came to about S$385,000. Its chief executive, Mr Poh Choon Ann, told The Straits Times: "I'm very happy to be receiving the award. It is important for each of us to give in whichever way we can."

There are 344 recipients this year, compared to 353 last year. Of these, 91 are individuals and 253 are organisations. Three out of 10 are first-time donors.

First-time recipient Hong Huazheng, a photographer, was among those who received the Supporter of the Arts award. He and his friends made a S$12,000 cash contribution to the Singapore Management University Emerging Artist Award.

Minister for Culture, Community and Youth Lawrence Wong, who handed out the awards at a dinner ceremony at Suntec City Convention Centre, said he was heartened to see so many first-time donors. "Your support shows that culture is shared and owned by all of us," he said.

Among long-time supporters which were recognised was Singapore Press Holdings (SPH), which is celebrating its 30th anniversary this year. SPH was honoured with its 22nd Distinguished Patron of the Arts award.

Ms Ginney Lim, SPH's general counsel and executive vice-president of corporate communications and corporate social responsibility, and general manager of the SPH Foundation, said: "This award is a befitting 30th anniversary gift for us. It is a testament of our commitment in supporting the local arts scene."

Also honoured last night was Marina Bay Sands, which received the Distinguished Patron of the Arts award. It has pledged S$750,000 to the Public Art Trust to bring art to high-traffic areas in the city and heartland.