'Hooligans' in video were CNB officers in action 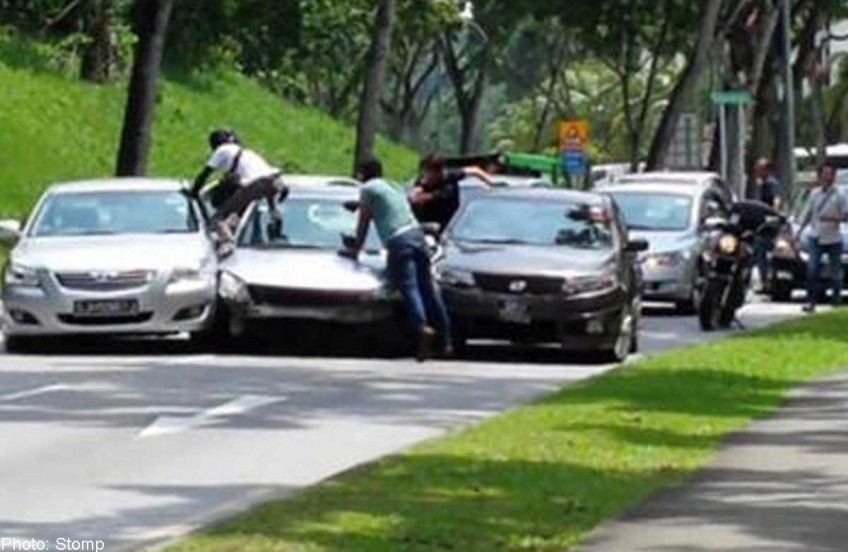 The 44-second clip shows a group of men – actually plain-clothes officers – surrounding the vehicle in the middle and trying to smash its windscreen. The video has registered over 216,000 views since it was uploaded.

A video of a commotion around three cars sandwiched on Bukit Batok West Avenue 2, which was posted online earlier this month, has turned out to be a dramatic drug bust by officers from the Central Narcotics Bureau (CNB).

The 44-second video showed a group of plain-clothes officers surrounding the vehicle in the middle and trying to smash its windscreen, amid some shouting.

A CNB spokesman said yesterday that the incident took place on July 2 at about 1pm, after CNB officers had earlier moved in to arrest a suspected drug trafficker.

To evade arrest, the suspect had crashed his car through the gantry of a public carpark, but officers managed to stop the vehicle after a brief pursuit and arrested him.

About 200g of crystal methamphetamine or "Ice" was seized from the male Singaporean's car, said the spokesman.

While some who saw the clip - which has registered over 216,000 views since it was uploaded 13 days ago - commented that a stun gun was used by officers, CNB said that no tasers were used during the bust.

The video, which showed at least two men climbing onto the bonnet and boot of the middle vehicle, drew some criticism from netizens on the drug enforcement officers' perceived hooliganism.

But others defended the officers' actions and applauded them for successfully nabbing the suspect.

"Good job guys, it's not easy apprehending a criminal, especially those who are desperate," said a netizen.

The CNB spokesman said that in a follow-up raid of the suspect's hideout in a Bukit Batok condominium, officers recovered 488 ecstasy tablets, about 160g of ketamine, 56 Erimin-5 tablets, a small amount of Ice and drug paraphernalia.

Investigations into the drug trafficking case are ongoing.