Hotels get thumbs up for going green 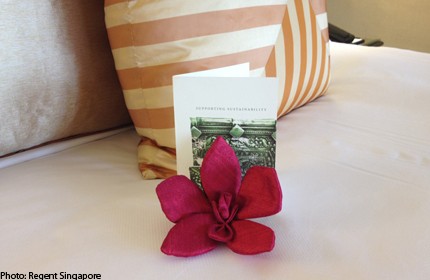 SINGAPORE - Going green and saving money - hotels can do both if they minimise the amount of waste they generate, Senior Minister of State in the Prime Minister's Office Heng Chee How said on Wednesday.

He noted that hotels generate "a significant amount of waste" due to the large number of guests they serve daily.

"In this regard, it will be prudent for hotels to systematically review existing practices, work with employees and suppliers to reduce or reuse waste at source, as well as engaging guests to recycle where possible," he urged.

Hotels in Singapore produce an estimated 60,000 tonnes of solid waste each year, enough to fill 114 Olympic-size pools, according to a 2011 report. Less than 10 per cent of it is recycled.

Mr Heng was speaking at the biennial Singapore Green Hotel Award ceremony on Wednesday, where 26 hotels were lauded for their environmental practices.

A new award logo was also launched, which winners can use in their communications material for two years.

One of the recipients, Regent Hotel, won praise for its linen-changing programme, where sheets in all rooms are changed every other day. Guests who prefer having them changed daily are requested to "opt out" by placing a silk orchid on the bed.

More than 99 per cent of their guests did not opt out, said the hotel's general manager, Mr Martin Sinclair. This has helped the hotel save labour and laundry costs.

In his speech yesterday, Mr Heng noted that changes to Singapore's Environmental Public Health Act will kick in next year.

These will require large commercial premises to report waste data and submit waste reduction plans. The requirements will start with hotels with more than 200 rooms and shopping malls with net lettable areas of more than 50,000 sq ft.