How good is Razer CEO Tan Min-Liang at gaming?

Or more precisely, the kind of early-morning routine that the CEOs of Apple and Twitter favour: gym workouts, yoga, runs and meditation performed when most people are still in bed.

"A lot of tech CEOs wake up at 5 o'clock in the morning, they meditate, and then they go for a run," Tan, 42, co-founder and chief executive of gaming hardware maker Razer, said in a recent mid-morning interview. "I hate all those CEOs. I cannot do that."

Tan wakes up at 8am most days if he has "no choice", checks email in bed before "dragging" himself to work. That last comment is misleading given how the avid gamer built Razer into a global business with a cult following in the gaming community. One fan tattooed Tan's likeness on his calf. Many more have inked themselves with Razer's logo of three intertwined snakes. 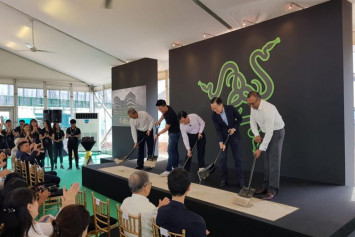 Today, he is arguably one the most high-profile tech entrepreneurs from Singapore since Sim Wong Hoo, the 64-year-old founder of Creative Technology, the company behind Sound Blaster audio cards.

Tan chose to list his company in Hong Kong instead of Singapore in 2017, raising more than US$500 million (S$676 million) and making him one of the richest self-made Singaporeans at the age of 40.

For this interview, we originally wanted to do something other than play video games with Tan, as part of an occasional series where South China Morning Post reporters engage tech personalities in their hobbies outside of work.

So together with Josh Ye from our sister news site Abacus, which earlier live-streamed an interview with Tan from Razer's store in Causeway Bay, we settled down to play Apex Legends, the wildly popular battle royale title that is Tan's latest obsession. We had proposed playing arcade games like Mario Kart or Street Fighter, but deferred to his preference.

Tan's first-ever video game back in the 1980s as a preschooler was Rescue Raiders - where you fly a helicopter and shoot enemies - played on his father's Apple II computer. The lifelong passion for gaming did not affect his studies. He went on to the top all-boys secondary school, Raffles Institution, where he was a scout, before reading law at the National University of Singapore.

In 1998, Tan, then in university, met his co-founder Robert Krakoff, who was in his sixties, while playing the online first-person shooter Quake. A year later, the two hard core players created the world's first gaming mouse, one that enhanced their performances so much that it got them kicked off the server for suspected cheating.

Tan now splits his time between Singapore, San Francisco and Hong Kong, overseeing a workforce of 1,500. He still spends his nights playing battle royales like PUBG and Apex, sometimes into the wee hours of the morning.

"It's a bit like, 'oh I'm just going to play one more game, one more game and one more game," and after that it gets a little longer," Tan said. "I know it's pretty not healthy. But that is how it is."

But back to our Apex Legends game. I am not a big fan of first-person shooter games chiefly because I suck at them. In our first match, I was responsible for parachuting our three-person squad into a good spot to pick up weapons and armour. I promptly did the opposite.

It seemed an eternity before Tan broke the silence, giving me a word of encouragement as I struggled to secure a weapon. "Take your time. Do not worry. It's all good," he said.

Except it was not. Our crew was eliminated in less than 10 minutes after we ran into our first enemies. The second match was not any better. I was lost the whole time, but at least my teammates got some kills. "It's super funny," Tan said, with a thin smile.

For a self-professed "zhainan" - Chinese slang for a homebound nerd - Tan is smooth and polished in person and on camera, with 250,000 followers on Twitter and able to pivot every question into a pitch for Razer's products or strategy. One teenage fan from Canada, who came to the store with his mother to buy a set of headphones for his birthday, saw Tan and asked for an autograph, which Tan happily obliged.

The day before our interview, Razer reported a 38 per cent gain in annual revenue of US$712 million for 2018 on demand for gaming peripherals like mice and keyboards. It narrowed its net loss to US$97 million from US$164 million in 2017.

Tan said he is focused on growing Razer beyond a hardware maker into a gamer-centric "ecosystem". But he steered the conversation away from future products, the stock price, revenue breakdown or when the company will turn a profit.

Last month, Razer shut down its online games distribution platform, which aimed to challenge the likes of Steam and the Epic Games Store, less than a year after its launch. "We have many experiments at Razer that do not bear fruit," Tan said. "We bet on you and we'll see if you can scale it. If you cannot, it's fine."

Another experiment in question is Razer's gaming phones. The company said it has cut about 30 employees from several unnamed projects, which has cast uncertainty over the launch of a new Razer handset.

In 2017, Razer rolled out its first premium phone designed with gamers in mind, followed by an upgrade a year later, with similar moves from Chinese brands like Xiaomi and Honor. Tan would not say if a Razer Phone 3 is coming.

"Running the company is a little bit like an RTS [real-time strategy] game," said Tan, referring to titles like StarCraft and Age of Empires, where players allocate resources, build bases, and assemble an army. "Do we create more 'units' for the mobile gaming segment? And then, of course, how do we flank the opportunities?"

Tan is actively involved in the design of Razer's products. For example, he chose the shade of pink for the Razer Quartz range targeting female gamers. He is also a stickler for detail.

The Razer shop in Hong Kong, for example, was almost delayed for opening, Tan said, because he wanted to make sure the floor tiles are perfectly aligned with Razer's logo on the wall. Every Razer product has the same scent in the packaging, which Tan said he picked after a long time. I wonder if the bamboo scaffolding now outside the shop, which partially obscured the Razer signage, drove him nuts. If it did, he did not show it.

The attention to detail at work stands in stark contrast to how little he cares about details in his personal life. Tan lives at home with his father when he is in Singapore. For almost a decade, lunch at work was almost always the same noodles or sandwich from near his offices in Singapore or the US, respectively, "because it's the shortest queue, and I can just eat it."

In 2014, when Tan met then Singaporean President Tony Tan Keng Yam, he "conveniently forgot about" the dress code and showed up in his signature black T-shirt and jeans.

He does not work out and does not drink. A typical Sunday afternoon for him, when he is not working, would be to stay at home and play games like Apex Legends and having McDonald's.

"I don't really do anything else. It's a bit sad, I know." Tan said with a wistful smile. "Gaming is my life, that's what it is for me."