Singapore's first female president, Halimah Yacob, wrote a post on Facebook that was widely praised by members of the Malay-Muslim community and shared some 6,000 times.

Picka.treatsg, an online business operating out of a Singapore public flat, saw an increase in orders of its cakes late last month, after the authorities announced commercial snack and drinks outlets would have to temporarily stop operating.

This came amid tighter restrictions during Singapore's circuit breaker or partial lockdown period, and just before the start of the Muslim fasting month of Ramadan.

With orders growing from three a week to three a day, Picka.treatsg owner Nur Syafiqah Suhaimi sprang into action, renting a car from a rental service to make deliveries from her four-room flat in Ang Mo Kio and ordering more ingredients and packaging.

She spent more than $400. So when the 23-year-old learned four days later that home-based businesses were not spared from stricter rules to limit the coronavirus outbreak, she was devastated.

"I sell my bakes and cakes in boxes and I just bought ingredients, like cream cheese which was quite expensive. So when this happened, I didn't know what to do and was at a complete loss."

Like Nur Syafiqah, other home-based business owners in Singapore selling items ranging from confectionery to sewn costumes, were shocked.

Even more so because businesses selling baked goods and owned by Muslims, who make up 14 per cent of Singapore's population, were primed for an uptick in orders ahead of Hari Raya Puasa, the holiday marking the end of Ramadan.

Some took their frustration to social media with an online petition that drew over 74,000 signatures in less than a week asking for the authorities to "revise their approach".

But it prompted a stern warning from the Minister in charge of Muslim Affairs Masagos Zulkifli, who said those behind the petition were trying to "incite" home-based business owners to "pressure the government to make exceptions" for them.

Masagos, who is also Minister for the Environment and Water Resources, later said if the rate of Covid-19 infections decreased, the restrictions could be eased before the Hari Raya Puasa festive period.

In his Facebook post on April 29, he also assured affected home-based businesses that they could apply for a government assistance, including a scheme that would offer a one-off cash grant of $500.

Two days later, Singapore's first female president, Halimah Yacob, wrote a post on Facebook that was widely praised by members of the Malay-Muslim community and shared some 6,000 times.

Every year, I purchase my Hari Raya cookies from home based businesses (HBB). I'm looking forward to doing the same this...

In it, Halimah, a former politician and trade unionist who was raised by a widowed mother who sold cooked food on a pushcart, described why home-based businesses were important to the Malay-Muslim community.

"[They] are predominantly run by women, usually with caregiving responsibilities, and is an important source of income for them. Although they bake throughout the year, it is during Ramadan that they can earn the most to pay for their own Hari Raya expenses and keep some for other needs," she said.

She added that she purchased Hari Raya cookies from the same home-based businesses every year and was looking to do so "when the community transmission situation improves".

Masrifah Ayoob, 53, the founder of Effa Delicacy, which sells cookies and tarts, recalls how she heaved a sigh of relief after reading Halimah's post. "I was so happy … I already started to imagine [after reading the post] that they would allow us to continue business in a few days, and it came true."

Indeed, National Development Minister Lawrence Wong on May 2 said home-based businesses would be allowed to resume operations from May 12 as part of a gradual move to ease "circuit breaker" or lockdown measures, as long as they ensured contactless delivery of orders, among other things.

Earlier this week, lawmaker Intan Azura Mokhtar delivered an impassioned speech in parliament on how the initial ban had affected Singaporean women who were wholly reliant on home-based baking for their livelihoods and to raise their families. 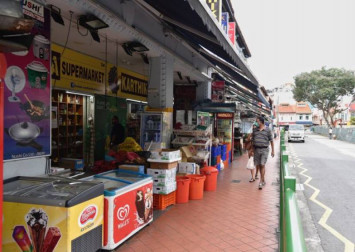 She asked why the government had decided to "back-pedal" on its decision, a point Masagos rejected by saying the authorities had to make "tough choices between preserving livelihoods and preserving life itself".

Intan went on to thank Halimah and Wong, adding that "it is the kind of leadership that people need in times of difficulty".

He said people were also unhappy at Masagos' response to the petition as it signalled that "a government decree must not be questioned and must be followed to the letter", which did not gel with the government's call for "an active citizenry".

"The largely positive reception towards the president's posting also tells us something about politics: a little bit of empathy can do a world of difference," said Walid.

Researchers Faizal Yahya and Mohamad Shamsuri Juhari from the Institute of Policy Studies research centre pointed out though that the minister's comments should be examined in the context of "prevailing uncertainties" and the links between health, safety and economic activities.

"You can't have one without the other for the well-being of the population," they said in an email reply.

Suzlina Rahman, 39, the founder of Curatedbysuz, a home-based bakery employing single mothers and stay-at-home mothers, said that the episode showed that women in these businesses needed more support.

She added: "I always felt that President Halimah has a deep connection and understanding of the community. You can feel her sincerity and humility in her post and it touched a lot of hearts and that is what we need to overcome the uncertainties that we are facing."