Every time Josh Lim meets up with his friends from secondary school in Singapore, they never fail to ask about his work in China.

"There's always this buzz and excitement when we talk about what's going on in China," noted Lim, who heads his own Shanghai-based investment and advisory firm, IJK Capital Partners.

"I guess our education has helped foster this affinity with China. They're curious and it's very easy for us to connect on the topic - more so than when I talk about the same things with friends from elsewhere, who tend to be less interested."

The number of SAP schools in the city state has grown from nine to 26 (comprising 15 primary and 11 secondary schools). Many of them are also top-performing schools.

These SAP schools have been thrust into the spotlight in recent years, drawing criticism for a lack of racial diversity and for serving as breeding grounds for elitism.

But despite the controversy, the schools also have their merits - especially when it comes to doing business in China. 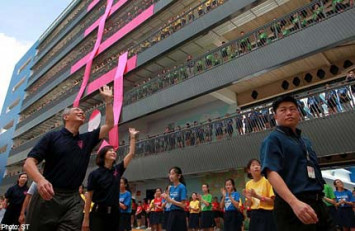 It was this focus on the Chinese language, history, and cultural heritage at Chinese High School that helped Lim build a deep and solid foundation in Chinese. Later on, his former schoolmates who were working in China also played an important role in his career by providing mutual support.

His biggest takeaway from school was bilingualism.

"Being more versatile linguistically means I can pick up words, accents, slangs and phrases in Chinese very quickly," Lim noted.

"This has given me an edge in China because I've often been able to go 'undercover' to navigate very localised towns in the country, and do business without the other party realising that I'm actually Singaporean - for some time, at least."

In the same vein, Kow Ping, director and founder of Hong Kong start-up Well Being Digital, said his SAP school education helped him build a strong foundation in Mandarin. He had studied at Catholic High School, another all-boys institution.

"But it didn't spark any interest about China. I didn't come to Hong Kong for that reason. I came here because in the electronics business, the centre of gravity was shifting to the Far East," he said.

In any case, Kow believes that being strong linguistically aids communication - the key to the art of guanxi, or cultivating relationships.

"Doing business in China used to be very guanxi-related because rules were not written down. But the thing is, guanxi applies not only to China, but also everywhere else. The key is that you have to contribute, such as by learning their language and their culture. Every node in the network has to function, if not that part will fail."

Given the scale of China's market, ISEAS-Yusof Ishak Institute senior fellow Lye Liang Fook believes that guanxi is all the more important when it comes to doing business there.

"The ideal scenario would be if the networks and experience of those who are already in China can be tapped on, so that the latecomers need not start from scratch and can have some foundation to work on," he said.

However, many other Singaporeans in China did not need SAP schools to broker good relationships in business or find success, for that matter.

Faith Teo, who founded a retail tech start-up 8XP in Shanghai, chose to quit school when she was 14. She taught herself web/app design and development by reading and taking online courses.

Elsewhere, K.K. Chua, a top executive at US cosmetics brand Mary Kay, dropped out of Bible College, and, before that, got a score of F9 for Mandarin in secondary school - the lowest achievable grade.

"Even when I was in China for a good 10, 15 years, I kept giving the excuse that I was English-educated, my Mandarin was not good," he recalled. It was only sometime in 2010 that he decided to hunker down and improve his grasp of the language.

"I can now write emails in Chinese, WeChat in Chinese, make 50-minute speeches in Chinese," he said, beaming with pride. "It's a question of what you set your mind to do. If you have an explorer's spirit, you're not afraid to take on something new. You'll always look beyond the frontier."