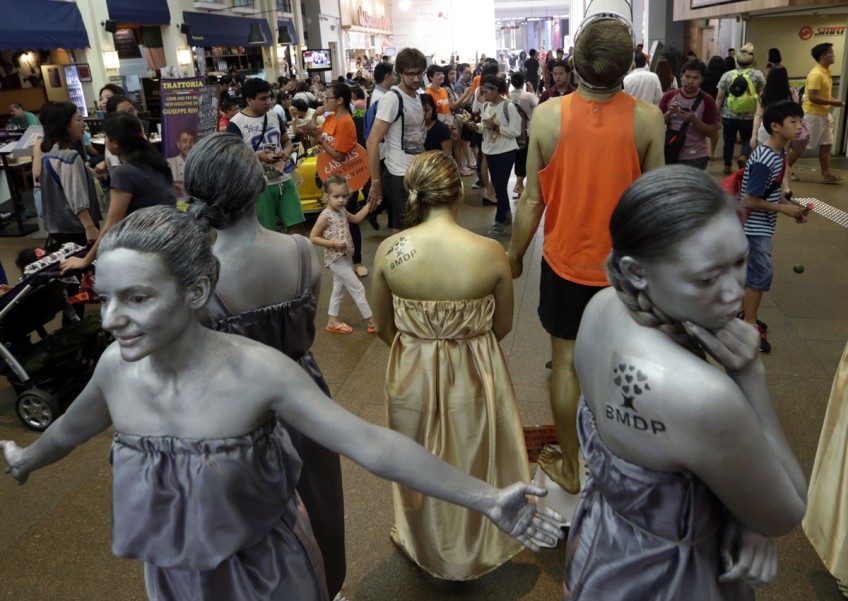 Fifty human statues (above) were stationed along Orchard Road yesterday to represent 50 patients waiting for a matching donor at any one time in Singapore.
The Straits Times

Ms Jane Prior is a woman on a mission. The chief executive of the Bone Marrow Donor Programme (BMDP) is out to bust myths about marrow donation and get more minorities on the donor registry.

One particular falsehood that plagues her is the idea that the donation process involves a painful extraction from the spine.

In fact, the procedure most often used involves a relatively painless blood donation.

The other method involves extraction from the pelvic bone under general anaesthesia, and is used only in about one out of 10 cases.

"And anyhow, we go nowhere near the spine; I want to get rid of this myth," she said.

She is also trying to boost the number of Malay and Indian donors, as successful matches are based on race and the two groups are currently under-represented on the registry. Malays make up just 5 per cent of the BMDP's registry of 50,000 donors, while 8 per cent are Indian.

Ms Prior spoke to The Sunday Times last Friday, the eve of the inaugral World Marrow Donor Day, when the BMDP deployed 50 "human statues" along Orchard Road to represent the 50 patients waiting for a matching donor at any one time in Singapore.

The BMDP also has a week-long exhibition at the 313@Somerset mall, which showcases stories of bone marrow donors and patients who were given a second chance at life. It runs until today. The BMDP has seen about 40 people a day signing up for the registry at the exhibition.

Ms Prior stresses the importance of building up the local donor registry. Of the 38 bone marrow transplants in Singapore this year, only five used bone marrow donated by locals. The rest came from overseas donors.

Ms Prior's own son required a transplant 19 years ago and she said that the local register then was very small.

Her experience inspired her to get involved with marrow donation and help build up the local registry, especially for minorities.

She added: "I am a woman on a rampage to make sure that no one is told that they can't get a transplant because of their race."