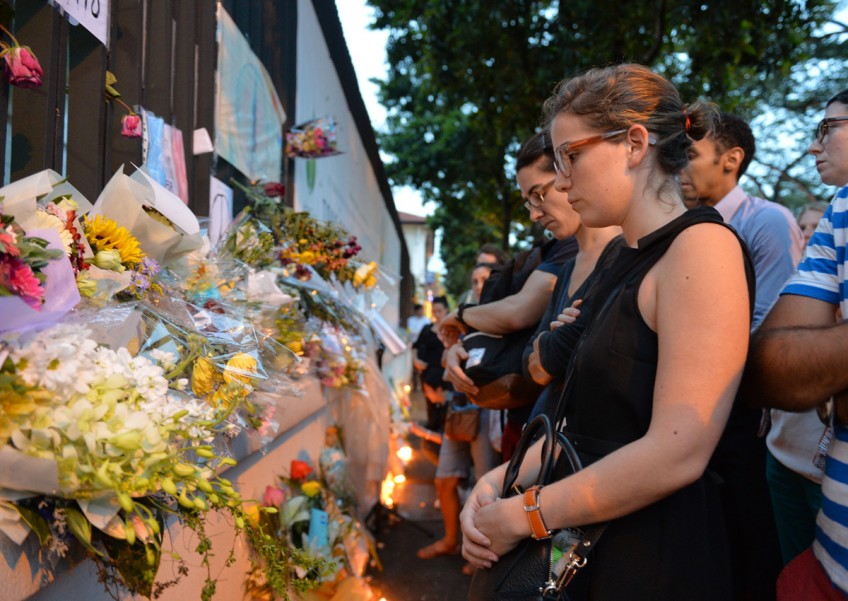 Hundreds queued outside the French Embassy in Singapore on Nov 16 to attend a memorial service for the victims of the Paris attacks.
The Straits Times

SINGAPORE - Hundreds queued on Monday evening outside the French embassy at Cluny Park Road to attend an evening memorial service for the victims of Friday's Paris attacks.

The 7pm service, which was only open to French nationals, included a speech by the French ambassador to Singapore Benjamin Dubertret, followed by a minute of silence for the victims, and then the singing of the French national anthem.

Said Mr Dubertret: "This should be a time of compassion and solidarity, and also a time of unity. I think terrorists (...) are aiming to divide society, to create lines of fracture between people, and to break the cohesion of free nations.

"We should certainly not allow them to advance. Our democracies are resilient, and I am confident being united around our core values of liberty, equality and fraternity is something we can achieve."

The Nov 13 terrorist attacks at a concert theatre, stadium and restaurants across Paris claimed 129 lives and injured more than 350 people.

The militant group Islamic State in Iraq and Syria (ISIS) has claimed responsibility for the attacks.

Minister for Culture, Community and Youth Grace Fu, who was in attendance, signed the condolence book and expressed Singapore's solidarity with France. "This act of terror should not have happened to any country, anywhere.

"We must also be prepared that should such an event happen in Singapore - I pray it does not happen ever, but should it happen - we must close ranks, remain united, and not be cowed by such acts."

At 6.30pm, the queue snaked out of Cluny Park Road and down Bukit Timah Road for about 300m until Serene Centre. Many bore flowers, or lit candles.

About 500 were able to enter the embassy. The remaining hundred or so stood in a crowd opposite and joined in the minute of silence and the singing of the French national anthem.

French national Marc Laurence, a logistics manager who has been in Singapore for 18 years, said: "I feel such anger, that this had to happen to innocents."

Said the 55-year-old, tears in his eyes: "Why would (the terrorists) do this? They are hurting everyone, even their own people."

Thirteen-year-old Olivia Faneco, who is half-French, clutched a bouquet of flowers. She said: "We were very worried about my cousin. She lives near one of the restaurants where the attacks took place. We couldn't locate her for a few hours. Luckily she was safe."

Parisian-born Albert Lahoud, a 32-year-old finance manager, said: "We spent the whole weekend staring at the news, hoping something would change, that it was not true. It made no sense.

"It was like an invisible hand had come along and swept them away. It was brutal."

This article was first published on Nov 16, 2015.
Get a copy of The Straits Times or go to straitstimes.com for more stories.