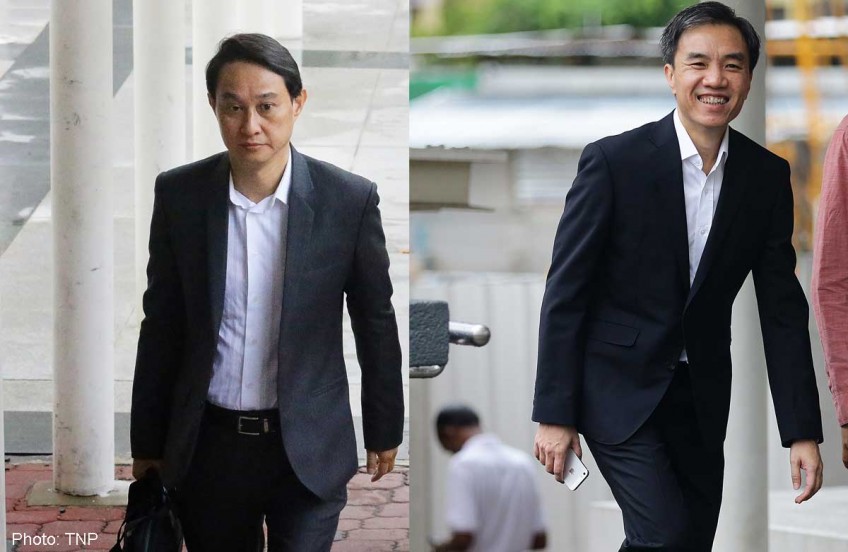 DID THEY MEET?: Chew Eng Han (left) says a meeting between him and John Lam (right) never happened because Chew was not in the country then.

Former fund manager pokes holes in testimony of ex-board member. They were supposed to have met.

And at that meeting, former City Harvest Church (CHC) fund manager Chew Eng Han was supposed to have spoken to John Lam Leng Hung, a former CHC board member. They were meant to talk about bonds, album sales and wanting to be a fund manager.

Chew was supposed to have also allegedly hinted that he would like to manage CHC funds.

But in court yesterday, Chew, 53, who was defending himself, said the meeting could not have taken place.

Disagreeing with Lam's recollection of the meeting, Chew presented evidence that he was away on holiday in Japan from June 18 to June 24, 2007.

But Chew, who was cross-examining Lam, said: "I'm submitting to you (Lam) right now that the meeting on 23 June could never have happened because I was not in Singapore." To which Lam replied that the meeting "might have been earlier".

Said Lam: "Your Honour, I've already said, best I can recollect, was around that period. "So I might have missed out on 23 June. It might be earlier."

Yesterday, Chew continued to poke holes at allegations of how he was the one who came up with the idea of Xtron and Firna bonds.

Chew and Lam, along with CHC founder Kong Hee, 49, are among six church leaders who are accused of misusing more than $50 million of church money through sham bonds.

Lam's memory was earlier tested by Chew, a director of investment firm AMAC Capital Partners, which transacted with the church, in relation to a $13 million sum to be invested in Xtron.

Chew questioned Lam on why he could not recall who had instructed Chew to raise the $13 million for the church's Crossover Project.

He added: "Don't you think you should have some sense of responsibility as a board member to inquire as to the trigger for this amount, the need for the bonds, who asked for it?" Lam said he did not recall because "it didn't matter".

Added Lam: "...AMAC is the fund manager, it was his (Chew) discretion to invest. When he (Chew) spoke with me, I understood that the monies for these bond proceeds will be used for the Crossover (Project)... So I know the objective is to fund the Crossover.

"So whether it is... it doesn't matter to me, because the point was what is the purpose of the use of the proceeds?"

The Crossover Project began in 2002 for Ho Yeow Sun, the wife of Pastor Kong, to become a successful pop singer, so she could evangelise and reach out to those who do not usually associate themselves with the Christianity and the church. Lam will be cross-examined by the prosecution today.