'Important that minorities have a chance to be elected President' 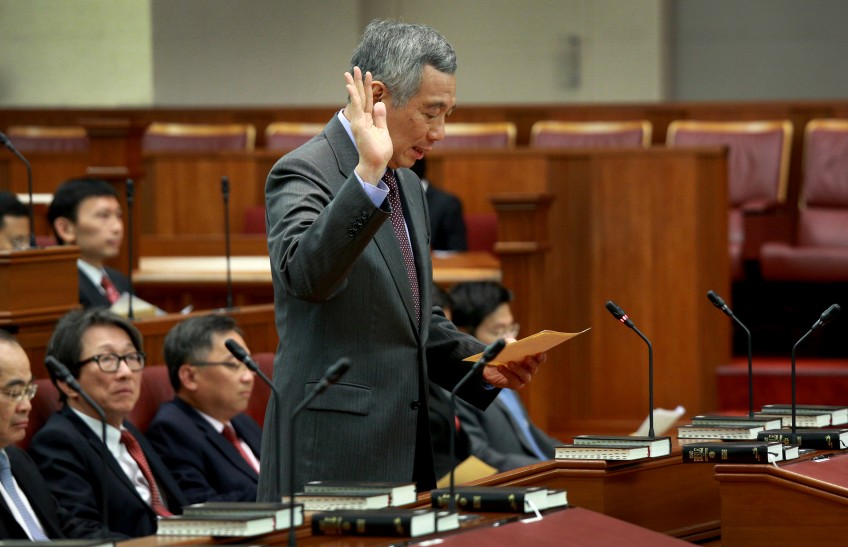 It is important for minorities to get a chance to be elected President, said Prime Minister Lee Hsien Loong yesterday.

The reason he gave is that the President, as head of state, represents Singaporeans of all races.

This is why the upcoming review of the Elected Presidency will look at how to ensure minority representation in the highest office of the land.

Singapore has only had one Malay president, the late Mr Yusof Ishak, who was appointed to the office at the country's founding.

Since the Elected Presidency was instituted in 1991, the country has not had a Malay president.

But with presidential elections likely to become more hotly contested in the future,"it will become much harder for a minority person to get elected", Mr Lee said.

He pointed out that this problem of ensuring minority representation had surfaced in Singapore's parliamentary elections, and was why multiracial Group Representation Constituencies were created.

"We should consider a similar mechanism for presidential elections, to ensure that minorities can be periodically elected if we have not had a particular minority as President for some time," he said.

Several political observers agreed on the need to ensure minority representation. Said former Nominated Member of Parliament Imran Mohamed: "Right now, (even) if there is a good Malay candidate suitable to be President, I don't think he can be elected."

Similarly, National University of Singapore (NUS) political scientist Bilveer Singh said: "You're assuming the electorate is sophisticated and the competition is going to be so gentlemanly. I don't think we have reached that stage."

But political observers also called for a nuanced approach, saying that standards should not be sacrificed for tokenism.

NUS political scientist Hussin Mutalib lauded Mr Lee's intention, but said the stringent qualifications for presidential candidates must not be relaxed for minority candidates. Criteria include personal and professional competencies in areas like financial management and leadership acumen, he said.

"To loosen or lessen the qualifying criteria just to enable a minority Malay candidate to be chosen as President, will neither engender the much-needed respect that this position requires - especially as a rallying institution to unite all Singaporeans - nor will it do much good to Singapore's image internationally," said Associate Professor Hussin.

"Whatever the new changes, the present method of electing our President through an election should be kept.

This will enable all Singaporeans to have a direct say in choosing the best person for the job," he added.

Commentators also suggested specific areas that the expert panel on constitutional changes could look at during the review.

Associate Professor Singh suggested having a President and Vice-President, with either always from a minority race.

Constitutional law expert Thio Li-ann, who said the idea of a Vice-President had been floated in 1988, pointed to the three-man presidential system in Bosnia as an example.

The Bosnian system has one president from each of the Bosniak, Serb and Croat races.

Alternatively, Institute of Policy Studies deputy director of research Gillian Koh said, the Presidential Election Committee can make it a rule to prevent a person of a certain race from contesting, if someone from the same race had just been President for two terms consecutively.

1984: Then Prime Minister Lee Kuan Yew disclosed during a walkabout in his constituency that a constitutional amendment to elect the President and give him powers to safeguard the national reserves was in the works.

1988 to 1990: More details on the proposed Elected Presidency were given in two White Papers presented in Parliament. It was hotly debated during the 1988 General Election.

1991:The Constitution was amended to create the Elected Presidency (EP). The President would no longer be appointed by Parliament. He would now be elected directly by the people.

What it is about

The President has two key custodial powers: safeguarding the spending of the country's reserves, and making key appointments to public office.

The President is directly elected in a national election. This is so that he has the people's mandate and the moral authority to counter the Government if needed.

Changes over the years

1994: The Constitutional Tribunal was set up. The President could refer constitutional questions to this body of Supreme Court judges for advice.

2008: The net investment returns framework was introduced, which let the Government tap long-term expected real returns on the national reserves and increase the income available for use in annual Budgets.

Accordingly, the Government had to seek the President's agreement on its projected rate of return for the next 20 years.

2008: President S R Nathan exercised the custodial powers of the President for the first time, approving the Government's issue of a $150 billion guarantee on all bank deposits here amid a global financial crisis.

2009:President Nathan approved the use of $4.9 billion for two schemes to save jobs and ease credit for firms - the first time since the EP was created that the Government drew on past reserves.