Improving the lot of low-wage workers 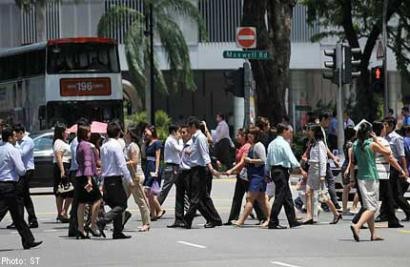 In his Chinese speech, PM says the Government understands the challenges SMEs face but foreign worker numbers need to be controlled.

SINGAPORE - A lack of appreciation for low-wage workers' jobs: That was one of the concerns among most participants at focus-group sessions conducted by the National Trades Union Congress (NTUC) this month.

They said this then leads to a lack of respect for low-wage workers, according to a statement released yesterday by NTUC.

Three sessions were conducted and they involved some 100 low-wage workers, service buyers and providers, and union and grassroots leaders.

The sessions were organised to help NTUC refine its initiatives for low-wage workers and shape actions to be taken to help them.

Employers and union and grassroots leaders also said openly shaming companies that treat their workers unfairly, or source for the cheapest workers and services, could help discourage such practices. Cheap sourcing could result in workers being paid less.

They added that social media should be used to highlight the challenges that low-wage workers face, as well as promote respect and appreciation for their contributions to society.

Changes to professionalise low-wage jobs and fight the stigma associated with them were suggested, like rebranding job titles to reflect a more-skilled role.