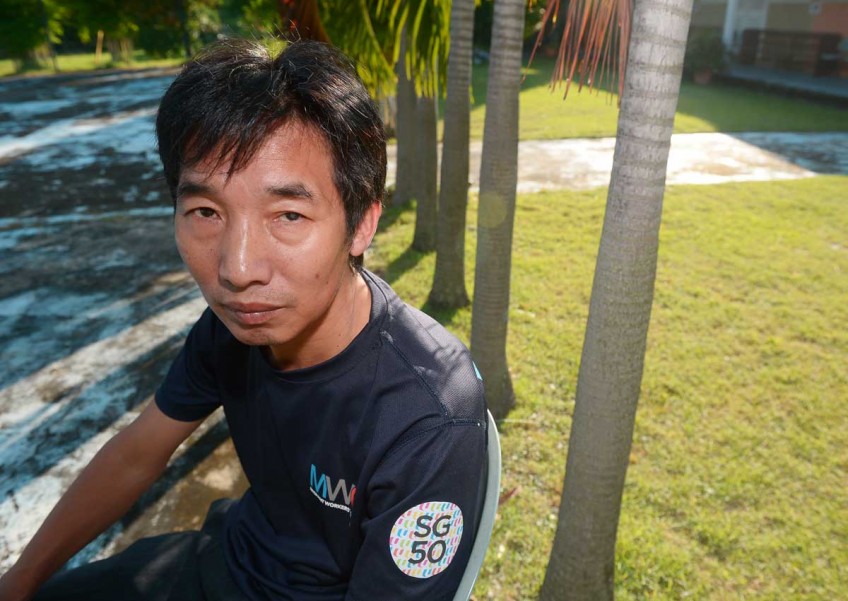 Mr Tang was awarded more than $122,800 in injury compensation and unpaid wages, but has yet to be paid.
The Straits Times

A workplace accident left Chinese national Tang Zengshun blind in one eye. But nearly two years later, he has yet to get a cent in compensation from his employer.

Last September, a labour court granted the 51-year-old construction worker $93,000 in compensation over the accident. However, his employer, construction company Yao Xing, did not pay up.

Last Wednesday, the amount was increased to more than $122,800 in injury compensation and lost wages and Yao Xing was given 21 days to stump up the money.

But the construction company's director, Mr Lu Xiuqi, claims he cannot afford the payout because he had not insured the worker.

If he fails to pay up in time, he could be prosecuted by the Manpower Ministry (MOM) and fined up to $10,000, jailed for up to a year, or both.

In October 2014, Mr Tang had been working on the renovation of a terraced house in Jurong West.

Another worker on the scaffolding above him was using a rivet gun, and as Mr Tang looked up, a piece of metal from the gun fell into his left eye, slicing through the cornea.

A spokesman for Healthserve, one of the migrant worker groups supporting Mr Tang, said such a delay is unusual. In most work injury cases its assists with, the employer usually pays up within a couple of months.

An MOM spokesman said investigations revealed that Yao Xing did not have a valid insurance policy to cover its liabilities as Mr Tang's employer under the Work Injury Compensation Act (Wica).

Employers are legally required to buy Wica insurance for foreign workers to secure their work permit. Failure to do so can result in a fine of up to $10,000, up to a year's jail, or both.

Insurance is only scrutinised by the authorities when the work-pass term starts, according to Migrant Workers' Centre (MWC) executive director Bernard Menon. Afterwards, it is managed as a contractual relationship between employer and insurer.

A failure to service the insurance policy or other lapses might go unnoticed until something befalls the worker.

The MOM convicted one employer for not insuring workers last year, down from two in 2014 and four in 2013.

In a letter to MOM's Work Injury Department in January, Yao Xing's Mr Lu said it is beyond the firm's means to pay Mr Tang's compensation or medical fees.

He also claimed Mr Tang's condition was partly due to "possible neglect" on the part of doctors in the hospitals that treated him, and said he had lodged a complaint with the Singapore Medical Council.

The Straits Times was unable to reach Mr Lu for further comment.

Migrant worker groups said they see a handful of cases each year in which an injured worker is uninsured, but this could be just the tip of the iceberg.

Humanitarian Organisation of Migration Economics operations manager Luke Tan has seen 10 such cases this year. He said these are of "serious concern" as the injured workers are likely to end up going home without compensation.

The MWC, which has sheltered Mr Tang for the past nine months, saw one other such case this year. The worker was owed $32,000, but ended up accepting a smaller sum and has since left Singapore.

Mr Tang is not sure he can stay in limbo for how much longer.

Floods hit his village in Jiangsu earlier this month, and he has lost touch with his family. He worries about them, especially his 90-year-old mother and grandson, three. "I can't do the work I used to," he said. "My home is gone. I have nothing left."