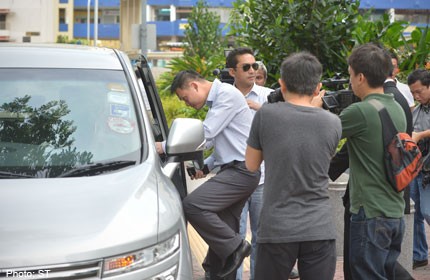 SINGAPORE - When prison inmate Dinesh Raman Chinnaiah, 21, assaulted a warden in 2010, the officers who restrained him did not maintain constant communication with him to monitor his overall condition. This was required by standard operating procedures.

Second Minister for Home Affairs S. Iswaran revealed this yesterday in response to questions raised by Members of Parliament over the incident, which took place on Sept 27 that year.

The inmate was later found to have died from positional asphyxia, or breathing difficulties, because of the position he was in.

Mr Iswaran also said that, according to findings from a Committee of Inquiry (COI), the officers should have been more conscious of the risks involved in such Control and Restraint (C&R) techniques and how to prevent positional asphyxia.

On July 19 this year, deputy superintendent of prisons Lim Kwo Yin, 36, was convicted of causing Raman's death by a negligent act, and fined $10,000. He was supervising the seven prison officers involved when the incident took place.

Mr Iswaran said that, in line with recommendations made by the COI, the Singapore Prison Service has "reviewed its C&R doctrines, instruction manuals and training materials to place greater emphasis on the risk of positional asphyxiation, and preventive measures".

Protocols, such as applying C&R techniques on violent inmates in a standing position when possible, were also introduced, he said.

Still, the COI has found the Singapore Prison Service's overall system and processes for managing violent inmates to be "appropriate, safe and effective", said Mr Iswaran, pointing out that maintaining order and discipline in the prison is a "difficult and challenging task".

"Nevertheless, we expect prison officers to perform their duties with integrity and professionalism," he said.

Mr Iswaran added that the Government accepts liability for the incident, and will compensate Raman's family.