The embassy of Israel in Singapore on Thursday said it condemns social media posts comparing the city state’s Covid-19 vaccinations to the Nazi Holocaust that killed 6 million Jews, days after an opposition figure made such an analogy on Facebook and Instagram.

With 72 per cent of its 5.7 million people fully inoculated, Singapore this week began implementing bifurcated social gathering policies for vaccinated and unvaccinated residents.

Apart from Bowyer, Goh Meng Seng – a member of another fringe opposition party – has in recent days put up posts invoking the Nazi regime.

“The embassy of Israel in Singapore strongly condemns recent posts circulating on social media likening the vaccination campaign and other vaccine-related issues to the Holocaust,” the mission said in a statement on Facebook, without mentioning any names.

“The Holocaust was a genocide perpetrated by the Nazi regime to slaughter 6 million innocent Jews and comparing the obvious health benefits of vaccinations that have benefited billions around the world is not only in bad taste, but is also Holocaust Distortion by downplaying the horrors of the Holocaust.”

Bowyer, who has been outspoken about his views against vaccination, on Tuesday uploaded posts on Instagram and Facebook that featured a monochrome image of the infamous railway track leading to Auschwitz, with the Nazi death camp in the background.

The post was superimposed with a message on how “it [the Holocaust] didn’t start with gas chambers” but one party rule controlling the media, censoring speech, silencing the opposition and dividing citizens into “us and them”.

“Singapore is now us and them … God help our nation!” Bowyer wrote as a caption to the post.

Faced with comments slamming him for the post, he responded defiantly.

In one exchange on Instagram, he asked a Jewish woman to “reflect” on “this turn of events [which] has been allowed to happen again” after she blasted his post as “disgusting and an insult to not only Jews of Singapore but Jews worldwide”.

Bowyer said on Wednesday he was tendering his resignation from the PSP as his views were divergent from those of the party. 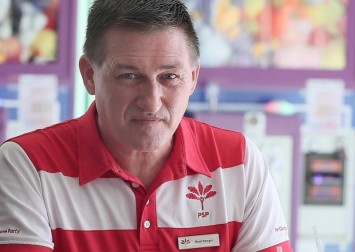 “I can’t stay silent when my family and so many others I speak to online feel pressured, unsafe and uncertain, but at the same time I won’t allow that and any online noise makers damage Progress Singapore Party either,” he wrote on Facebook.

Bowyer, who contested and lost in a general election last July under a PSP ticket, in December stirred similar controversy when he suggested Covid-19 was a disease that was unlikely to require serious treatment and questioned the government’s advocacy of “experimental vaccines with known side effects”.

Goh, the leader and founder of the People’s Power Party, on Wednesday uploaded an image of a notice in a social club that said changing rooms and toilets were for the exclusive use of vaccinated users.

“Things are getting out of hand due to Nazis PAP,” Goh wrote, referring to Singapore’s long-ruling People’s Action Party .

Starting Tuesday, residents can dine in groups of five if all patrons are vaccinated. The allowed group size for large-scale events such as marriage solemnisations and congregational or worship services is also higher if all attendees are immunised.

Singapore is aiming to have vaccinated about 80 per cent of its population by September as it transitions to a policy of treating Covid-19 as endemic, so it can fully reopen its economy.