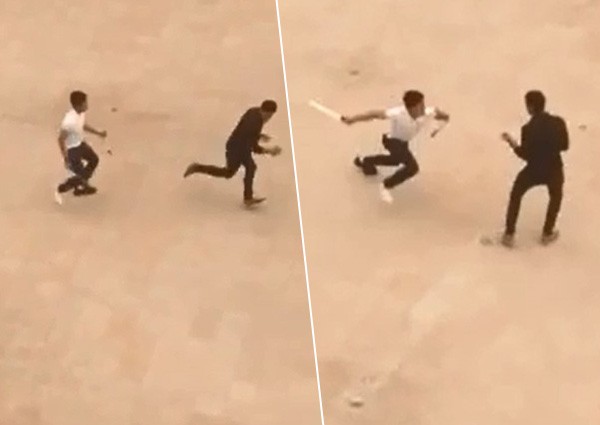 SINGAPORE - An Institute of Technical Education (ITE) student has admitted to slashing a teenager with a knife at ITE College West in March, in an attack sparked by a dispute over the victim's girlfriend.

Muhammad Zuhairie Adely Zulkifli's attack left his victim, Ahmad Nurthaqif Sahed, 18, with cuts on his left forearm, left fingers, upper back, and behind his left ear. The victim also suffered fractures on his forearm and two fingers.

He shouted out to the victim's girlfriend, Norhalizah Abdul Wahab, 17, calling her "baby". The duo conversed briefly.

On March 10, the victim went to the ITE College West campus at 12.30pm to meet his girlfriend, a first-year student there.

Upon spotting the victim, Muhammad Zuhairie Adely confronted him and stated that he was unhappy with him.

The accused then went to his locker and retrieved a bread knife with a 35cm blade. He had obtained the knife from a member of the Rochor Way gang, which he used to belong to.

Knife in hand, Muhammad Zuhairie Adely charged at the victim, who was seated with his girlfriend at a large open space on campus known as the Piazza.

He had told investigators: "I brought the knife along as I felt that Ahmad Nurthaqif would be fearful of me. However, Ahmad Nurthaqif tested my limits and this (sic) I decided to use the said knife to slash on him."

He slashed at the victim from behind. When the victim ran towards the centre of the Piazza, he gave chase and continued swinging the knife.

The victim then used his hands to protect his face from the knife and was slashed on his hands. The attack was captured on video by a student at the campus. The victim managed to flee soon after.

Muhammad Zuhairie Adely fled as well, but was arrested later that day at his grandmother's house at Ang Mo Kio Avenue 6.

Mr Ahmad Nurthaqif was admitted at the National University Hospital for two days and was given three months of medical leave.

The accused also pleaded guilty on Friday to a separate incident of rioting on April 20 last year.

Then aged 16, Muhammad Zuhairie Adely and five other youths aged 14 to 16 punched and kicked a teenager, who suffered swelling on his left cheek and multiple bruises and abrasions all over his body.

Deputy Public Prosecutor Kumaresan Gohulabalan sought a sentence of 18 months' jail and six strokes of the cane for both charges.

A third charge of the accused escaping from the Muhammadiyah Welfare home on March 31 last year was taken into consideration.

He is remanded pending a pre-sentence report and a reformative training centre reports. He is due back in court on Nov 5.

This article was first published on Oct 16, 2015.
Get a copy of The Straits Times or go to straitstimes.com for more stories.