Jail and caning for passenger 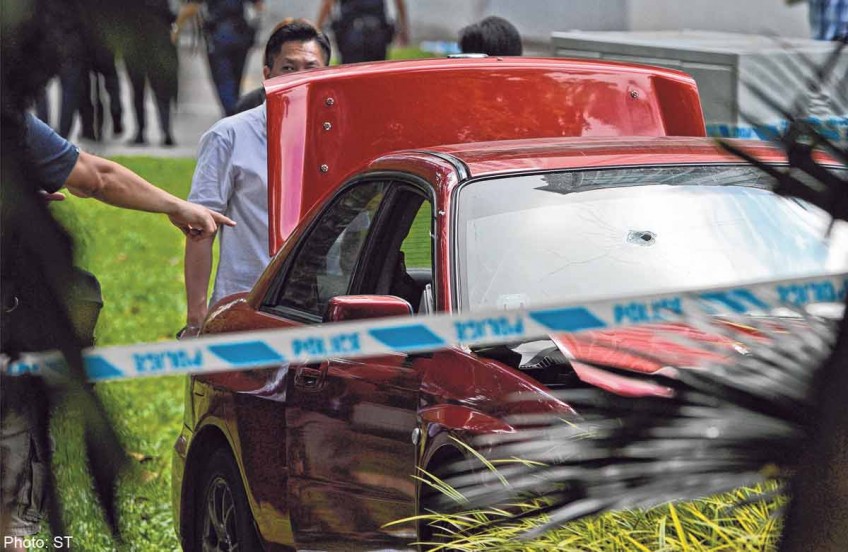 A bullet hole is seen on the front windscreen of a red sedan car which was involved in an early morning shooting incident where a man was shot dead and two others were arrested after a car illegally bypassed a police vehicular checkpoint, on 31 May 2015. The area around Shangri-La Hotel had been placed under a tight security net, given that it was hosting the Shangri-La Dialogue attended by defence ministers and security chiefs.

One of the two passengers in a car that was shot at after it crashed through security barriers near Shangri-La Hotel last month was sentenced to eight years' jail and three strokes of the cane for drug offences yesterday.

The other passenger, Muhammad Syahid Mohamed Yasin, 26, was also arrested for drug offences. The driver of the red Subaru Impreza, Mohamad Taufik Zahar, 34, died on the spot.

The car, with a single bullet hole in the front windscreen, only came to a stop on a grass patch 250m from the hotel entrance.

The area around the hotel had been placed under a tight security net as it was hosting the Shangri- La Dialogue, a major security summit attended by defence ministers and security chiefs.

Deputy Public Prosecutor Yang Ziliang said Mohamed had abused "ubat", a street name for heroin, at his home in Marsiling Crescent on May 30.

He was liable for enhanced punishment for drug consumption as he was previously convicted for a similar offence in 2003.

He also spent time in jail for having a controlled drug in 2012.

He admitted in his statement that the heroin and Ice were for his own consumption.

He had bought three packets of heroin and Ice from a man in Lorong 15 Geylang for $480 on May 29.

Seven other charges of mostly drug-related offences were taken into consideration during his sentencing.

Mohamed could have been jailed for up to 10 years and/or fined up to $20,000 for each enhanced drug possession charge.

For enhanced drug consumption, the minimum is five years' jail and three strokes, up to seven years and six strokes of the cane.

Meanwhile, the case against Syahid will be mentioned tomorrow afternoon. He intends to get a lawyer to mitigate.