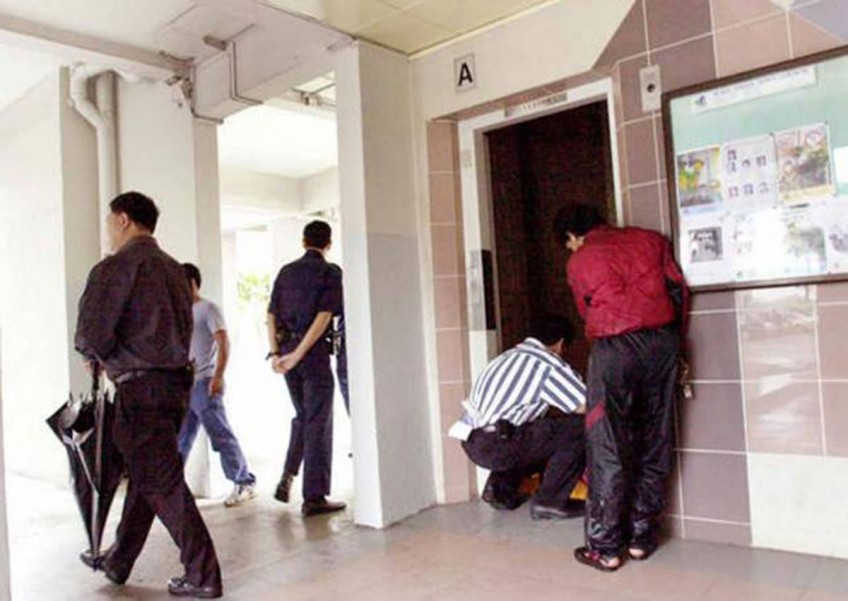 A 32-year-old man who robbed and stabbed a woman with a knife in a lift when he was 16 years old was sentenced to the maximum 10 years' jail and 12 strokes of the cane yesterday for robbery with hurt.
Shin min

A 32-year-old man who robbed and stabbed a woman with a knife in a lift when he was 16 years old was sentenced to the maximum 10 years' jail and 12 strokes of the cane yesterday for robbery with hurt.

Gunasegaran Ramasamy turned himself in at a neighbourhood police centre on Nov 17, 2013, after he was pricked by his conscience.

His lawyer, Criminal Legal Aid Scheme Advocate Ng Shi Yang, said Gunasegaran heard "voices" shortly after the 2001 offence, which worsened in the years leading up to his confession in 2013.

A district court heard that on the day of the crime, Gunasegaran's sister had told him to buy instant noodles at a shop in Bukit Batok when he decided to look for targets to rob. He wrapped a knife about 28cm long with a newspaper and tucked it at the back of his pants.

When he arrived at a block in Bukit Batok West Avenue 8, he spotted Ms Soh. The manager with a telecommunications firm had just returned home from work.

Gunasegaran followed the victim to the lift lobby, pressed the lift button and used his knuckle to rub against the button in a bid to remove his finger print.

After they got into the lift, he whipped out his knife and demanded money.

Ms Soh put up a struggle and was stabbed in her arm. She then gave him three $10 notes.

Dissatisfied, he tried to snatch her purse. When she resisted, he became angry and stabbed her repeatedly on her arm and body.

He then fled by running down the stairs.

Gunasegaran had convictions in 1998, 2000, 2002 and 2006 for burglary, robbery and theft, and was last given four years' jail and six strokes in 2011 for causing grievous hurt, breach of a personal protection order and concealing stolen property.

"I also note that you were very young at the time and was remorseful," he said.

After Gunasegaran's arrest following his surrender, the urine sample he provided tested positive for methamphetamine.

He admitted he had smoked Ice two days earlier and had been smoking the drug over two years. The maximum penalty for the offence is 10 years and $20,000 fine.