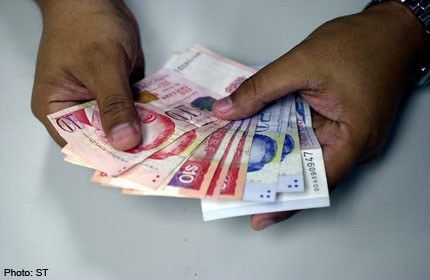 Short of money, Abdul Adziz Asmon decided to make his own with a scanner, A4 paper and eggs. The egg white was spread onto the counterfeit $1,000 notes to give them the feel of real Singapore currency.

Calling it "an extremely serious offence", District Judge Marvin Bay on Friday sentenced the 36-year-old to six years and seven months in jail, for forging and using 24 fake $1,000 notes.

It was in October 2011 when Abdul Adziz first hatched his plan to forge notes. Then an operations assistant with marine service agency Nautical Trade, his duties included delivering cash payments to the firm's suppliers.

He told Aimie and four other friends how he wanted to substitute fake notes for the money passed to him by his employer.

After buying the equipment, Aimie and two accomplices holed themselves up in a Geylang hotel room, where they experimented with forging methods using a genuine $1,000 note.

Aimie used a hair dryer to blow dry paper coated with egg white. When they were satisfied, they destroyed the fake.

In January last year, Nautical Trade passed $80,000 to Abdul Adziz to make payment to several suppliers. Over the next two days he, Aime and four accomplices forged 24 $1,000 notes in a Costa Sands Resort chalet in Pasir Ris. Abdul Adziz used the fakes when handing $30,000 to a supplier, who was not fooled. It called Nautical Trade to complain.

When confronted, Abdul Adziz denied doing anything wrong and even lodged a police report claiming he was unaware he had handed fake notes to the supplier.

The other four accomplices, who received between $500 to $3,000 from Abdul Adziz, will be dealt with separately. Counterfeiters of currency could be jailed for up to 20 years and fined.