Jailed for raping teen in his car 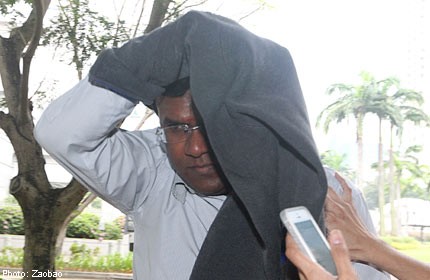 SINGAPORE - The girl was just 16 years old when he raped her in the backseat of his car in July 2010.

He had spotted the schoolgirl having sex with her boyfriend in another car and given her an ultimatum: Follow him or he would report them to the police for littering - for the tissues and condom that had been thrown out of their car.

Following a six-day trial, Sivakumar Selvarajah, 42, was sentenced on Friday to 12 years jail and 12 strokes of the cane after the court found him guilty of three of four charges.

The court found the former aircraft technician had molested the teenager, made her perform oral sex on him and raped her.

But he was acquitted of a charge of posing as a police officer when he approached the girl earlier that day.

Justice Choo Han Teck said the prosecution had not proven its case "beyond a reasonable doubt" for that charge.

Sivakumar, who was represented by lawyers Amarjit Singh and Foo Cheow Ming, will be appealing against his conviction and sentence.

In their closing submissions, Deputy Public Prosecutors (DPPs) Sellakumaran Sellamuthoo and Ng Yiwen said Sivakumar had approached the girl and her boyfriend at a multi-storey carpark in Block 685, Woodlands Drive 73, in the afternoon of July 16, 2010.

The couple had just finished having sex in a car.

Sivakumar, who is married with two children, confronted the pair, claiming that he had seen "everything".

That was when he gave the girl the ultimatum.

But instead of taking her home, he took her to Tampines Industrial Avenue 4, where he committed the three offences.

In mitigation, Mr Foo said no violence was used against the girl and there were no injuries on her.

For raping the girl, Sivakumar could have been jailed up to 20 years and fined in addition to being caned.