Warehouse manager Wataru Murase pleaded guilty in court to two counts of criminal trespass and one count of molestation.

SINGAPORE - A Japanese expat trespassed into a female toilet at Far East Square and molested a woman as she was washing her hands.

Warehouse manager Wataru Murase, 29, did not run away when his terrified 21-year-old victim screamed.

When she moved into a squatting position to protect herself, he did the same and tried to touch her again before fleeing the scene.

The incident happened at 11.43pm on Oct 12 last year when he entered a female toilet at the first storey of Far East Square in Pekin Street near Raffles Place, but was chased out by an unknown woman. 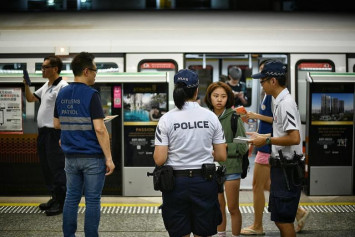 He headed towards a nearby male toilet and lingered in the vicinity before returning when the woman left the premises.

When his 21-year-old victim entered the same female toilet shortly after midnight, he ran inside.

Deputy Public Prosecutor Amanda Han told District Judge Kenneth Yap that Murase approached his victim from behind and slipped his hands into her top.

The DPP added: "The victim immediately covered her chest, squatting down to protect herself while screaming. However, the accused persisted and squatted down as well... Eventually, the accused gave up and ran out of the toilet."

The woman came out a few seconds later and approached a nearby security guard who advised her to alert the police.

The court heard that the victim made a police report later that evening.

For outraging the woman's modesty, he can be jailed for up to two years and fined or caned.

And for each count of criminal trespass, he can be jailed for up to three months and fined up to $1,500.