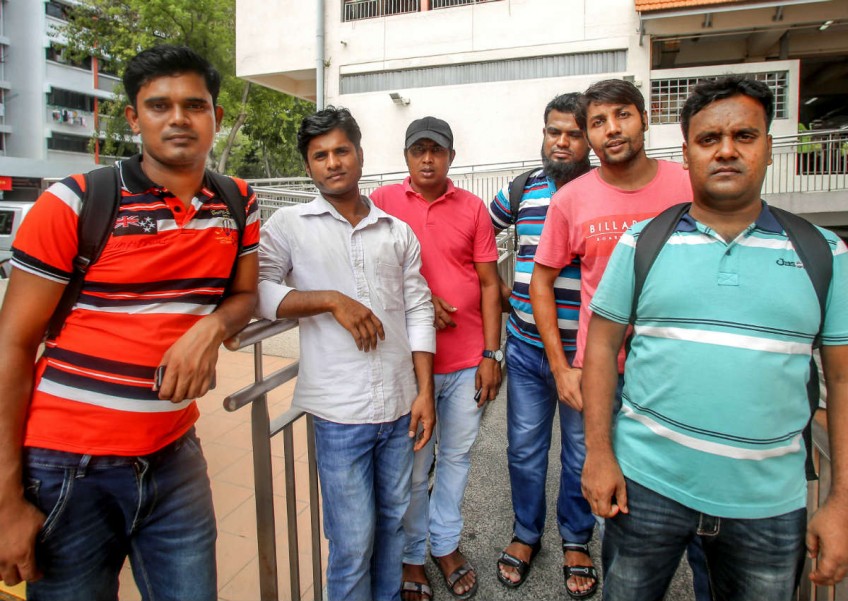 At least six Bangladeshi workers may have to go home as soon as next week, if they are not able to find a new employer.

Their previous employers, HBB Engineering and C-Plus Engineering, owed them between four and eight months' pay.

In total, 31 workers from the two companies have been affected.

While the workers have received a portion of their pay, some have been out of work since January after their work permits were cancelled by their employers.

Though the Ministry of Manpower (MOM) informed them that they had two weeks to approach any employment agency for help, the workers have not been able to find alternative employment.

A spokesman for MOM said the six workers will have the remainder of their salaries paid through insurers later when they either find a new employer or when they return home.

But the workers will be going home to a mountain of debts they'd hoped to pay off with a steady job in Singapore.

Mr Prodhan Abdur Razzak, 36, was an excavator operator with HBB Engineering. He came to Singapore last May and stopped receiving his salary in July. He said his employer cancelled his work permit in January.

He has received $1,773 - half of the pay he is owed by the company - but has a $4,700 debt to pay off back home, consisting of a bank loan he took to pay agent fees to travel to Singapore and medical bills incurred by his family.

The Straits Times reported on March 10 that the companies are being investigated by MOM.

Mr Razzak, who comes from the Chandpur district in Bangladesh, told The New Paper: "I asked my boss for some money to pay the medical bills, but he always said he had no money.

"I even cried but, in the end, I had to borrow from a friend to pay the bills."

Mr Razzak added that his S Pass expires on March 30.

His is one of 4,500 salary-related claims involving foreign workers that MOM has received every year for the last three years. MOM said more than 95 per cent of claims are resolved every year.

Mr A.B.M. Rafiqul Islam, the owner of both HBB Engineering and C-Plus Engineering, was not contactable for comment yesterday.

Migrant Workers' Centre (MWC) chairman Yeo Guat Kwang told TNP that, while the centre is able to actively source for employment for the workers through its network of industry associations, the "success rate is generally not high" and called for a "multi-stakeholder, collaborative approach" to the issue.

"MWC plans to partner the industry associations, as well as the MOM, in exploring and considering additional measures that the stakeholders may take to improve our system to better assist and facilitate migrant workers to secure alternative employment," said Mr Yeo.